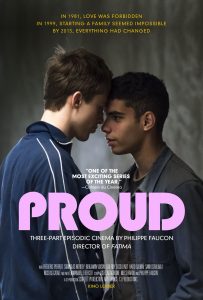 Charles. Victor. Bao. Three generations of men from the same family, which will be transformed by the social progress happening in the country. Three men shown as symbols of their time. Each episode is dedicated successively to each one of them, around three historic moments. Retrospective and epic, the series also portrays a family as well as a social and a political situation. Three episodes to tell that it has never been easy to be proud. Portrait of a broken family, Proud is a chronology about tolerance shown through a family. A family that is a milestone of the country’s situation.

Link to purchase tickets to stream this series in our Virtual Cinema will be available from Friday, June 19th (Thursday at Midnight) until Thursday, July 2nd. To purchase and stream, click the ‘Stream Now’ button!

“One of the most exciting series of the year.” — Cahiers du Cinema

“A series that defends the fundamental rights of gay people.” — Le Parisien