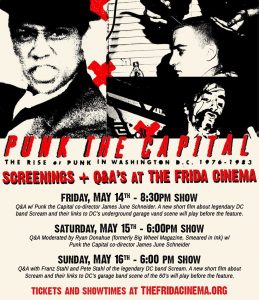 Relive the early days of punk with Punk the Capital: Building a Sound Movement, a dynamic portrait of the DC punk scene and philosophy.

When punk rock erupted in Washington DC, it was a mighty convergence of powerful music, friendships, and clear minds. This film is the first to explore the incredible challenges that this subculture faced when it took root in the Nation’s Capital in the late 1970’s.
Punk the Capital situates DC punk within the larger narratives of rock n’ roll, working as a powerful multi-layered story for both fans and non-fans of punk rock. Featuring musicians such as Bad Brains, Henry Rollins, Ian MacKaye, and Jello Biafra, this film dives deep into the ideas and sounds from this transformative music scene which continues to be influential culturally and politically around the world.

LOVE this theater..OMG. I’ve been here several times now for different events. I’ve attended 2 of the 3 Scott Pilgrim events thrown by Cinemattack. I was even the lucky winner of the Scott Pilgrim album on vinyl. I don’t have a record player..but may as well be a trophy for me because I never win anything! lol. I also attended “The Last Unicorn” event with Peter S Beagle- the author speaking and answering a Q and A afterwards. This was so awesome. I have always loved loved this movie and it was … END_OF_DOCUMENT_TOKEN_TO_BE_REPLACED

I love the Frida, as an avid movie watcher, it’s great to have a place to go where many classic, cult and underrated films are shown. I had the pleasure of attending “The Decline of Western Civilization” screening with director Penelope Spheres doing a Q&A. Her films are so historically important and impacted me at a very young age. I am forever grateful for the experience, like nowhere else would this be possible. I think it’s truly amazing what the staff and everyone involved is doing for the … END_OF_DOCUMENT_TOKEN_TO_BE_REPLACED