Q&A on Wednesday, May 20th at 5pm PST/8pm EST with directors Betsy West and Julie Cohen, moderated by Melena Ryzik from the New York Times! Accessible on the rental page for the film. 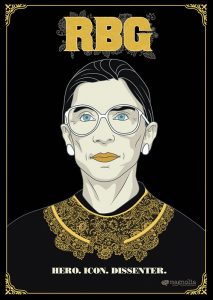 At the age of 85, U.S. Supreme Court Justice Ruth Bader Ginsburg has developed a lengthy legal legacy while becoming an unexpected pop culture icon. But the unique personal journey of her rise to the nation’s highest court has been largely unknown, even to some of her biggest fans – until now. RBG explores Ginsburg’s life and career.  From Betsy West and Julie Cohen, and co-produced by Storyville Films and CNN Films.

Link to purchase tickets to stream this film in our Virtual Cinema will be available from Friday, May 15th (Thursday at Midnight) until Thursday, May 21st. To purchase and stream, click the button below!

A portion of every ticket purchased goes directly towards supporting Orange County’s only nonprofit Art-house theater. Tickets for RBG are $5!

“The life and work of the associate justice of the US Supreme Court, Ruth Bader Ginsburg (aka “the notorious RBG”) is the subject of this dense, inspiring and often playful panegyric.” — Kevin Maher, Times UK

“The movie’s touch is light and its spirit buoyant, but there is no mistaking its seriousness or its passion.” — A.O. Scott, New York Times

“RBG takes various facets of a fascinating life and stitches them together, as documentaries go, into a genuine beauty.” — Brian Lowry, CNN.com

What a hidden gem! I had such a lovely time at a recent showing of Godzilla (1954). This theater is a bit timeworn, yet undeniably quaint and charming with an unconventional feel. And interestingly enough, the audience served as the sweet element of surprise. Those in attendance created an atmosphere of delight, comfort, and personal acceptance… and get this.. there was an actual host who presented a brief preface to the film just prior to viewing. Very collegiate, which I loved!  All in all pe… END_OF_DOCUMENT_TOKEN_TO_BE_REPLACED

I love the Frida, as an avid movie watcher, it’s great to have a place to go where many classic, cult and underrated films are shown. I had the pleasure of attending “The Decline of Western Civilization” screening with director Penelope Spheres doing a Q&A. Her films are so historically important and impacted me at a very young age. I am forever grateful for the experience, like nowhere else would this be possible. I think it’s truly amazing what the staff and everyone involved is doing for the … END_OF_DOCUMENT_TOKEN_TO_BE_REPLACED