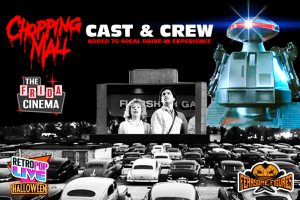 Today, RetroPop Media, Fearsome Figures, LiveXLive and The Frida Cinema announced that they have added the cast and crew from the 80’s cult classic film “Chopping Mall” to the ‘RetroPop Live! Halloween Drive-in Movie Double Feature” experience that kicks off the show, October 16.

“Chopping Mall” Director / Co-Writer Jim Wynarksi, Actress Kelli Maroney, Actor Russell Todd and Co-Writer Steve Mitchell will all appear live for an in-person Q & A session at “The Mess Hall” in Irvine, CA. They will appear before the drive-in double feature begins and a duplicate Killbot robot will also be on display for social media photo opportunity. Tickets are on sale now at: https://thefridacinema.org/chopping-mall-puppet-master/.

Eric Fox, Special Effects master and star of SyFy Channel’s hit series “Face Off” will moderate the Drive in “Chopping Mall” Q & A as well as host several panel Q & A’s during the virtual livestream event, which will take place on Saturday, October 17th.

The virtual festival will now feature top cosplay social media influencers “The Horror Queen,” “The Real Michael Myers” and ‘Creepy Cute Jaylah” as judges of the “Gag Me With a Spoon Virtual Costume Contest” that will allow viewers to post their Halloween costumes on social media with the #RetroPopLive hashtag for a chance to win exciting prizes.

“RetroPop Live! Halloween” also features cast reunion Q & A panels with favorite iconic horror films from the 80’s including “Friday the 13th” “Killer Klowns From Outer Space” and “Child’s Play.” Viewers will also have the option of purchasing autographs and/or virtual meet and greets with their favorite celebs.

The FREE virtual festival is being produced and curated in partnership with Fearsome Figures, The Frida Cinema, Sports Authentics USA as well as the creators of DARKSIDE in RIVERSIDE, NostalgiaCon, and Altísimo Live events. Registration for the four-hour livestream festival is at RetroPopLive.com.

RetroPop Live: Halloween can be seen online on October 17 starting at 1 p.m. PST by registering at www.RetroPopLive.com and will also be available nationally and internationally free through various broadcast and live stream media partners, including LiveXLive. Pop culture media companies and organizations such as The Frida Cinema will also broadcast the show through their Facebook and YouTube channels, giving RetroPop Live: Halloween! a broad national and international viewership.

Audiences at home will also have several options to get involved live on the show throughout the day with opportunities to not only win prizes, but also be featured on the show in a variety of engaging ways.

About RetroPop Media
RetroPop Media is the world’s first retro pop culture events, live stream productions, and media platform dedicated to celebrating all things “Classic” and “Old School”… from the “Groovy” 70’s to the “Totally Awesome” 80’s and the “OMG” 90’s.

RetroPop Media produces both live and virtual events tailored to fans of nostalgia. The company’s founders have created and produced DARKSIDE IN RIVERSIDE, NostalgiaCon, Altísimo Live, and Hispanicize! RetroPop Media is also a leading 360 live stream production partner for other festivals, producers, and brands.

About Sports Authentics USA
Sports Authentics USA is Socal’s leading memorabilia dealer specializing in authenticated autographs from the worlds of Sports, Pop Culture and Music as well as custom framing services transforming your treasures into true pieces of “wall art”.

About LiveXLive Media, Inc.
Headquartered in Los Angeles, California, LiveXLive Media, Inc. (NASDAQ: LIVX) (the “Company”) (pronounced Live “by” Live) is a global platform for live stream and on-demand audio, video and podcast content in music, comedy, and pop culture. LiveXLive, which has streamed over 1200 artists since January 2020, has become a go-to partner for the world’s top artists and celebrity voices as well as music festivals concerts, including Rock in Rio, EDC Las Vegas, and many others. In April 2020, LiveXLive produced its first 48-hour music festival called “Music Lives” with tremendous success as it earned over 50 million views and over 5 billion views for #musiclives on TikTok on 100+ performances. LiveXLive’s library of global events, video-audio podcasts and original shows are also available on Amazon, Apple TV, Roku and Samsung TVs in addition to its own app, destination site and social channels. The Company’s wholly-owned subsidiary, PodcastOne, generates more than 2.1 billion downloads annually across more than 300 podcasts. For more information, visit www.livexlive.com and follow us on Facebook, Instagram, TikTok, Twitter at @livexlive, and YouTube.

What a hidden gem! I had such a lovely time at a recent showing of Godzilla (1954). This theater is a bit timeworn, yet undeniably quaint and charming with an unconventional feel. And interestingly enough, the audience served as the sweet element of surprise. Those in attendance created an atmosphere of delight, comfort, and personal acceptance… and get this.. there was an actual host who presented a brief preface to the film just prior to viewing. Very collegiate, which I loved!  All in all pe… END_OF_DOCUMENT_TOKEN_TO_BE_REPLACED