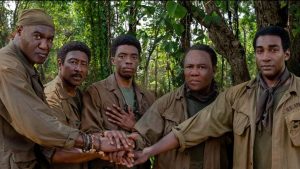 After winning his first Oscar for Blackkklansman, Spike Lee teams up with Netflix for his new joint, Da 5 Bloods. The film follows a group of four black Vietnam War veterans who return to Vietnam to find the remains of a fallen comrade and the gold they left behind.

Right off the bat, the movie teaches a quick history lesson. The opening contains documentary footage of the Vietnam War, the Civil Rights movement, and other civil unrest in the 1960s and 1970s. Lee wants the viewers to know the world that these characters grew up in.

Even as the film rolls along, Lee uses the characters to teach little-known history. The black soldiers talk about obscure African Americans who made an impact on history, dating back to the Boston Massacre. Later, a Vietnamese character discusses American war crimes that many viewers were probably unaware of.

The four veterans are brought to life by Delroy Lindo, Clarke Peters, Norm Lewis, and Isiah Whitlock Jr. The chemistry between the four actors brings the veterans’ lifelong friendships to life.

The standout performance of the film is Lindo as Paul, the veteran most affected by the war. His character has been haunted by the war his entire life and is clearly on edge throughout the film. Lindo commands the screen with that volatility, making viewers wonder if and when he will go over the edge.

Paul’s character serves as an example of the film’s theme: the past still affects the present. Even though the war had ended, Paul still suffered the consequences of it through his PTSD. The release of Da 5 Bloods may seem coincidental with everything going on in America at the moment, but it would not to Lee and others, as the painful history of black people in America is still felt to this day.

This theme can also be seen in Paul’s relationship with his son, David. Even though David was not drafted to serve in the Vietnam War, the injustice against his father still affects him. Paul’s time in the war along with other misfortunes in his life prevented him from truly loving his son. David is left having to fight for his father’s love, even though he did nothing to lose it.

Lee structures the film’s story with a different aspect ratio than usual. When the story starts with the veterans first returning to Vietnam, the film is in a standard 1.85:1 widescreen aspect ratio as if it was played in a movie theater. When they head into the jungle, the film goes to a 16:9 ratio that fills the whole screen. Lee knew that the film would be watched at home, so he changed the ratio in order to make viewers feel more immersed in the jungle.

In the flashbacks to the veterans’ time in Vietnam, Lee uses the academy ratio, making the footage a square. These sequences are also shot on 16 mm unlike the rest of the film which was shot digitally. These decisions make these flashbacks feel like they were documentary footage of the war that so many Americans are familiar with.

Da 5 Bloods is an ambitious movie to a fault. Most of the first half feels more thoughtful, dealing with history and the characters’ internal struggles. The second half however is more action-driven with gunfights and explosions. While it is entertaining, it feels a little underwhelming to what had come before.

Lee’s voice as an artist is blunt but it leads to his best work such as Do the Right Thing, Blackkklansman, and now Da 5 Bloods. Along with his style as a filmmaker, Lee continues to make notable films about social issues that tap into the zeitgeist.

I love the Frida, as an avid movie watcher, it’s great to have a place to go where many classic, cult and underrated films are shown. I had the pleasure of attending “The Decline of Western Civilization” screening with director Penelope Spheres doing a Q&A. Her films are so historically important and impacted me at a very young age. I am forever grateful for the experience, like nowhere else would this be possible. I think it’s truly amazing what the staff and everyone involved is doing for the … END_OF_DOCUMENT_TOKEN_TO_BE_REPLACED

What a hidden gem! I had such a lovely time at a recent showing of Godzilla (1954). This theater is a bit timeworn, yet undeniably quaint and charming with an unconventional feel. And interestingly enough, the audience served as the sweet element of surprise. Those in attendance created an atmosphere of delight, comfort, and personal acceptance… and get this.. there was an actual host who presented a brief preface to the film just prior to viewing. Very collegiate, which I loved!  All in all pe… END_OF_DOCUMENT_TOKEN_TO_BE_REPLACED