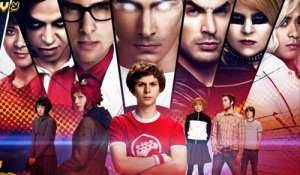 Once upon a time, in a land far far away called Toronto, Canada, there lived a slacker named Scott Pilgrim. One day, he was given a mission: to defeat The League of Evil Exes. Why? He had to…if he wanted to go out with the girl of his dreams.

Scott Pilgrim vs the World is a 2010 comedy film based on the graphic novel series of the same name. Each volume of the series had a unique tagline following the main title. Graphic novelist Bryan Lee O’Malley was approached very early on by his publisher about a movie deal. The film was pitched to Edgar Wright soon after he finished Shaun of the Dead. Soon enough, the film was thrown into the planning phases after the first volume of the graphic novel was published.

When the film was released, it was considered a box office bomb even though it was critically acclaimed for its style, music, and cast. It grasped the comic book style so thoroughly through its use of whip-crack editing. Music was produced and licensed through indie bands based in Canada. This was major considering O’Malley claims that it is the bands of Ontario, Canada that helped inspire him for his works. Metric was asked to provide music for the film and gave them the rights to a song they had only ever performed live. Metric vocalist Emily Haines is said to be the inspiration for Envy Adams, and it makes sense if one has ever seen the band perform. Lastly, the cast is wall to wall stars. A film with Micheal Cera, Mary Elizabeth Winstead, Anna Kendrick, Brie Larson, Kieran Culkin, Jason Schwartzman, Aubrey Plaza, and Chris Evans is hard to imagine flopping at the box office nowadays, but here we are. The film, for some reason, just didn’t catch the eyes of many at the time.

But as of 2020, Scott Pilgrim vs The World sits as the defining cult classic of the 2010s. It bridges the gap from Millenials to Gen Z with its manic energy and sarcastic jokes. And it must be mentioned that no other movie (maybe ever) has successfully nailed the video game-feel quite like this one. Most of that credit must be given to the film’s director: Edgar Wright. He was so married to O’Malley’s graphic novel throughout production–and it really shows in the final product. As of this blog being published, The Frida Cinema just played the film at the Zion Lutheran Church in Anaheim, CA to over 300 cars over the course of two nights. And who was there (via Zoom) to welcome/introduce the film? Edgar Wright himself.

I love the Frida, as an avid movie watcher, it’s great to have a place to go where many classic, cult and underrated films are shown. I had the pleasure of attending “The Decline of Western Civilization” screening with director Penelope Spheres doing a Q&A. Her films are so historically important and impacted me at a very young age. I am forever grateful for the experience, like nowhere else would this be possible. I think it’s truly amazing what the staff and everyone involved is doing for the … END_OF_DOCUMENT_TOKEN_TO_BE_REPLACED

LOVE this theater..OMG. I’ve been here several times now for different events. I’ve attended 2 of the 3 Scott Pilgrim events thrown by Cinemattack. I was even the lucky winner of the Scott Pilgrim album on vinyl. I don’t have a record player..but may as well be a trophy for me because I never win anything! lol. I also attended “The Last Unicorn” event with Peter S Beagle- the author speaking and answering a Q and A afterwards. This was so awesome. I have always loved loved this movie and it was … END_OF_DOCUMENT_TOKEN_TO_BE_REPLACED