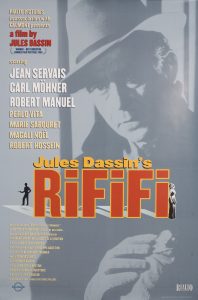 Back from the pen, tough guy Jean Servais and some old cronies plan to knock over a jewelry store — the resulting heist a legendary 30-minute sequence without dialogue or music. Blacklisted Hollywood exile Jules Dassin turned a potboiler by milieu specialist Auguste Le Breton into an existential thriller that earned him Cannes’ Best Director prize and set the standard for screen robberies for decades to come.

Link to purchase tickets to stream this film in our Virtual Cinema will be available on Friday, May 8th (Thursday at Midnight). To purchase and stream, click the button below!

A portion of every ticket purchased goes directly towards supporting Orange County’s only nonprofit Art-house theater. Tickets for Rififi are $7.99!

“The best film noir I have ever seen.” — François Truffaut

I love the Frida, as an avid movie watcher, it’s great to have a place to go where many classic, cult and underrated films are shown. I had the pleasure of attending “The Decline of Western Civilization” screening with director Penelope Spheres doing a Q&A. Her films are so historically important and impacted me at a very young age. I am forever grateful for the experience, like nowhere else would this be possible. I think it’s truly amazing what the staff and everyone involved is doing for the … END_OF_DOCUMENT_TOKEN_TO_BE_REPLACED