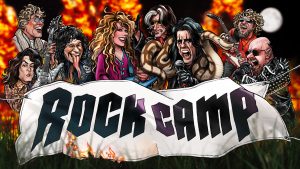 Summer camp meets Spinal Tap as we journey to Rock ‘n’ Roll Fantasy Camp, where dreamers from across America and around the world gather to shred with their heroes – and learn to rock like the legends.

Rock Camp is an institution and cultural phenomenon that has been going on in Los Angeles, New York and other cities since 1996. The brainchild of music producer David Fishof, Rock Camp boasts a jaw-dropping array of rock star “counselors” that include Roger Daltrey, Alice Cooper, Paul Stanley and Gene Simmons, Nancy Wilson, Joe Perry, Jeff Beck, Slash and countless other rock legends. The counselors teach, inspire and jam with the campers over the course of four days. Each Rock Camp concludes with all of the counselors and their respective campers, performing together.

Rock Camp The Movie is giving away a free trip to the Rock ‘N’ Roll Fantasy Camp, and memorabilia to celebrate the release of the new documentary. This film is directed and produced by Doug Blush (Icarus, 20 Feet from Stardom).
To enter the giveaway, simply go to RockCampTheMovie.com/giveaway.

I love the Frida, as an avid movie watcher, it’s great to have a place to go where many classic, cult and underrated films are shown. I had the pleasure of attending “The Decline of Western Civilization” screening with director Penelope Spheres doing a Q&A. Her films are so historically important and impacted me at a very young age. I am forever grateful for the experience, like nowhere else would this be possible. I think it’s truly amazing what the staff and everyone involved is doing for the … END_OF_DOCUMENT_TOKEN_TO_BE_REPLACED