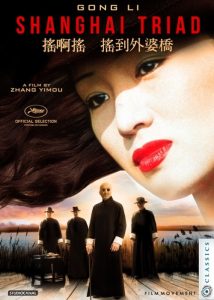 Hired to be a servant to pampered nightclub singer and mob moll Xiao Jinbao (Gong Li, Ju Dou, Farewell My Concubine), naive teenager Shuisheng (Wang Xiaoxiao) is thrust into the glamorous and deadly demimonde of Shanghai’s crime syndicates. Over the course of seven days, Shuisheng observes mounting tensions as triad boss Tang begins to suspect traitors amongst his ranks and rivals for Xiao Jinbao’s affections.

Link to purchase tickets to stream this film in our Virtual Cinema will be available on Friday, July 3rd (Thursday at Midnight) until Thursday, July 16th. To purchase and stream, click the button below!

I love the Frida, as an avid movie watcher, it’s great to have a place to go where many classic, cult and underrated films are shown. I had the pleasure of attending “The Decline of Western Civilization” screening with director Penelope Spheres doing a Q&A. Her films are so historically important and impacted me at a very young age. I am forever grateful for the experience, like nowhere else would this be possible. I think it’s truly amazing what the staff and everyone involved is doing for the community. They bring the magic of the silver screen without charging you an arm & a leg to attend their special events/screenings. I highly encourage any film lover to check out the Frida, no matter what film you choose, you will not be disappointed! They have an awesome online presence as well (IG, Website) where you can ask any them any questions or view their monthly calendar. They also host local art shows, film festivals showcasing new artists and film-makers. … END_OF_DOCUMENT_TOKEN_TO_BE_REPLACED