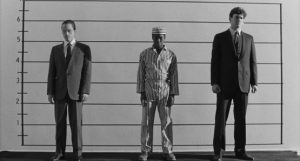 A young artist living in New York, on the fringes of the financial district and its rushing crowds, tries to make a living sketching passers-by on the street. He survives on his meager means and has found refuge in an abandoned building. One night, on the corner of a back alley, he finds a little girl whose father has just been murdered. While struggling to take care of her, he meets a young rich woman who immediately falls in love with this awkward couple.

LOVE this theater..OMG. I’ve been here several times now for different events. I’ve attended 2 of the 3 Scott Pilgrim events thrown by Cinemattack. I was even the lucky winner of the Scott Pilgrim album on vinyl. I don’t have a record player..but may as well be a trophy for me because I never win anything! lol. I also attended “The Last Unicorn” event with Peter S Beagle- the author speaking and answering a Q and A afterwards. This was so awesome. I have always loved loved this movie and it was … END_OF_DOCUMENT_TOKEN_TO_BE_REPLACED