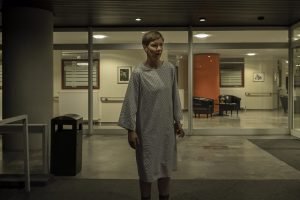 Dreams and reality collide in this ambitious, unsettling psychological thriller that tackles the horrors of Germany’s past using folklore and fairytale imagery. Director-writer Michael Venus describes his feature debut as “an antithesis of the German Heimatfilm.” A flight attendant (a game Sandra Hüller of Toni Erdmann fame) suffers a breakdown after experiencing demonic nightmares. Her resourceful daughter (Gro Swantje Kohlhof, from the zombie flick Ever After) visits the aptly named village of Stainbach where her comatose mother lies hospitalized, and gradually unearths their sinister family history as well as an assembly of Nazi sympathizers. Amie Simon from I Love Splatter calls it “a delirious and delicious supernatural mystery with a creepy patriarchal cult wrapper.”

What a hidden gem! I had such a lovely time at a recent showing of Godzilla (1954). This theater is a bit timeworn, yet undeniably quaint and charming with an unconventional feel. And interestingly enough, the audience served as the sweet element of surprise. Those in attendance created an atmosphere of delight, comfort, and personal acceptance… and get this.. there was an actual host who presented a brief preface to the film just prior to viewing. Very collegiate, which I loved!  All in all pe… END_OF_DOCUMENT_TOKEN_TO_BE_REPLACED

I love the Frida, as an avid movie watcher, it’s great to have a place to go where many classic, cult and underrated films are shown. I had the pleasure of attending “The Decline of Western Civilization” screening with director Penelope Spheres doing a Q&A. Her films are so historically important and impacted me at a very young age. I am forever grateful for the experience, like nowhere else would this be possible. I think it’s truly amazing what the staff and everyone involved is doing for the … END_OF_DOCUMENT_TOKEN_TO_BE_REPLACED