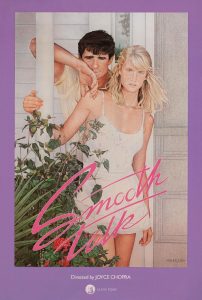 Suspended between carefree youth and the harsh realities of the adult world, a teenage girl experiences an unsettling awakening in this haunting vision of innocence lost. Based on Joyce Carol Oates’ celebrated short story “Where Are You Going, Where Have You Been?” and produced for PBS’ American Playhouse, the narrative debut from director Joyce Chopra features a revelatory breakout performance from Laura Dern as Connie, the fifteen-year-old black sheep of her family whose summertime idyll of beach trips, mall hangouts, and innocent flirtations is shattered by an encounter with a mysterious stranger (a memorably menacing Treat Williams). Winner of the Grand Jury Prize at Sundance, Smooth Talk captures the thrill and terror of adolescent sexual exploration as it transforms the ingredients of a standard coming of age portrait into something altogether more troubling and profound. Restored in 4K by the Criterion Collection.

I love the Frida, as an avid movie watcher, it’s great to have a place to go where many classic, cult and underrated films are shown. I had the pleasure of attending “The Decline of Western Civilization” screening with director Penelope Spheres doing a Q&A. Her films are so historically important and impacted me at a very young age. I am forever grateful for the experience, like nowhere else would this be possible. I think it’s truly amazing what the staff and everyone involved is doing for the community. They bring the magic of the silver screen without charging you an arm & a leg to attend their special events/screenings. I highly encourage any film lover to check out the Frida, no matter what film you choose, you will not be disappointed! They have an awesome online presence as well (IG, Website) where you can ask any them any questions or view their monthly calendar. They also host local art shows, film festivals showcasing new artists and film-makers. … END_OF_DOCUMENT_TOKEN_TO_BE_REPLACED