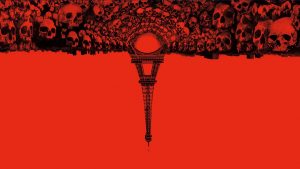 “Also, no found-footage movie [has] ever used score…We all took turns screaming and then stretched those screams out and that became the sound of the air in the spaces. So you’re hearing human screams stretched out. You can feel something human surrounding you. It doesn’t sound like a scream but you feel like that’s what it is.”

The Hell depicted in John Erick Dowdle’s frightening katabasis As Above, So Below is buried under rivers of blood, walls of skeletons, and awful French graffiti. Posing at times as a faux documentary, and other times as a jittery “found-footage” horror film, As Above, So Below documents the search for the mystical Philosopher’s Stone, an ancient talisman of great alchemical power, by a young group of amateur adventurers with deeply traumatic hang-ups. Following a series of Goonie-ean like riddles, academic polymath Scarlett Marlowe (Ready Player One’s Perdita Weeks) and her team inadvertently find themselves crossing over into a portal to Hell while investigating a lead.

What to say about a conundrum of a film like this? Because of its disordered documentary style, one must accept a certain amount of clumsy dialogue in order to simulate the “realism” at play. And yet, the ambitious screenplay by Dowdle and his brother Drew balance this by producing highly motivated scares, and a palindromic narrative structure; breezy expositional scenes one might normally yawn at become sinister warnings when encountered later in the film. Deploying one phantasmagorical image after another, the Dowdles build a propulsive experience languishing in dread and terror.

Plunging deep into the famously spooky network of catacombs underneath the streets of Paris, the film begins in earnest. Endless hallway mazes are paved with some combination of mysterious runic symbols or decaying skeleton bones, drenching nearly every frame of the film with a ghostly ambiance. A flurry of demonic and biblical imagery gradually erodes the “reality” of the film the deeper our characters enter the catacombs. “The only way out is down” becomes a common, reluctant refrain.

Because of its genre, the events shown in this film are necessarily unclear. A quote from British multimedia artist Brian Eno comes to mind:

“…so much modern art is the sound of things going out of control, of a medium pushing to its limits and breaking apart…The excitement of grainy film, of bleached-out black and white, is the excitement of witnessing events too momentous for the medium assigned to record them.”

The impressionist depictions in As Above, So Below reflect this instability in the recorded image – even hi-def digital ones. The entire appeal of “found-footage” horror, that you are seeing something more “real” than a highly produced movie, rests on this axiom. Though cut to resemble a frantic stream-of-consciousness state, deviating from the investigative documentary conceit, the film works spectacularly. The disturbance of hallowed tombs, untouched for centuries, is sure to knock loose a demonic spirit or two, and at that point who’s to say how things are supposed to behave.

With unprecedented access by French authorities, the film production was allowed to shoot on-location in the catacombs in areas that had never been photographed before. This was made possible by the small footprint promised by the filmmakers: timed shooting schedules, helmet cameras, battery powered lighting rigs, etc. These limitations, and their resulting visual aesthetic, recall the cinematography of another French-based production about an ancient cave, Werner Herzog’s Cave of Forgotten Dreams (2011). Though light on “spooky” elements, Herzog’s film is similarly reflexive in its acknowledgement of production restrictions necessary to preserve the natural state of the cave interiors. To try and hide this aspect would deprive the story of it’s authentic, organic disposition.

In overcoming these challenges, As Above, So Below mirrors one of its own early sequences where an old church bell is fixed and rings hallelujah for the first time in centuries. If nothing else the film is a contemporary document of the catacombs at this particular time in history. Everything that’s on screen from the moment our characters enter the catacombs, to the moment they leave has never, and perhaps will never be seen by another living person again (unless the French government starts getting super relaxed about preservation regulations all of a sudden, which is unlikely).

Maybe in another 1000 years or so, if earth is somehow still around, another film crew shooting a found-footage horror movie will be allowed access into the catacombs, and they will see what we saw with new eyes, new perspectives. They will watch this movie and wonder how we did it. Maybe they won’t even need cameras to make the film.

The flash in the pan that the Dowdles captured is a bit like observing a science-fair volcano done with immaculate execution. Though a classical and familiar premise, it’s littered with extra-ordinary detailing and flourishes that hasn’t been seen in recent memory. This film’s only goal is to frighten and thrill. To understand it better is to allow yourself to be taken by the camera, to crawl behind those characters into the gates of Hell and marvel.

What a hidden gem! I had such a lovely time at a recent showing of Godzilla (1954). This theater is a bit timeworn, yet undeniably quaint and charming with an unconventional feel. And interestingly enough, the audience served as the sweet element of surprise. Those in attendance created an atmosphere of delight, comfort, and personal acceptance… and get this.. there was an actual host who presented a brief preface to the film just prior to viewing. Very collegiate, which I loved!  All in all pe… END_OF_DOCUMENT_TOKEN_TO_BE_REPLACED