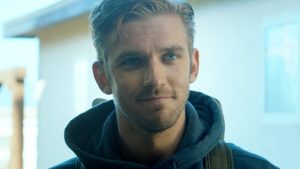 Let’s not be coy. Even if you haven’t seen Adam Wingard’s nostalgic home invasion thriller The Guest (2014), you have seen a film like it. Its debt to slasher film tradition is conspicuously injected into each glossily photographed scene as shadows clash with neon lit compositions, and horrified screams wash over an eerie synth soundtrack. The brutal naturalism at play comes with the territory of a cozy, domestic horror film like this – a stranger or other such force descends on a small family in a small town to disrupt their lives, forcing them to band together and extinguish said threat. Violence begets violence doubly. It’s an 80’s movie remade for the 10’s

Like a good 80’s horror film all the recognizable family archetypes are here: Spencer Petersen (played by Leland Orser), the lovable alcoholic father, Laura Petersen (a weepy Sheila Kelley), the inert but emotional mom, Luke Petersen (up and comer Brendan Meyer), the nerdy youngest son who gets bullied at school, and middle child Anna Petersen (scream queen Maika Monroe), the one that pieces it all together. We meet the Petersens a few days before Halloween as they mourn the recent loss of their oldest son Caleb, a casualty of the War in Afghanistan. A different monster than the one we’re about to meet.

Enter the one who calls himself David Collins. Played with psychopathic aplomb by Dan Stevens, “David” visits the Petersens to fulfill a dying wish for their son Caleb. As a matter of fact David continues, he served in the same secret special forces unit as Caleb, and was with him just before he died. As a matter of even more fact, there’s a picture on the Petersen’s mantle showing David and Caleb together while deployed, looking like fast friends. It’s all very convenient as a plot setup, but far too much to process for Laura Petersen. Watching her choke up as she receives this information makes you almost want to believe David – the closure she never had, finally arriving at the same front porch where she was told her son was dead. Even using well trod material, the film is brought to life by astounding performances like this.

Dan Stevens does much of the heavy lifting in the film, cultivating one of the great movie monsters of the 21st century. In a role that’s equal parts charming and frightening, Stevens delivers to us a confident, capable, and totally unhinged performance. Scenes of spastic violence teach us not to trust David, but of course you already knew that by now. That nothing much is known for sure about David Collins makes him all the more frightening in the era of instant Information. Even when military officials arrive for third act damage control, not much of an explanation for David’s motivation is given. He’s a totally enigmatic monolith of sadism with no start or end point.

The polite but anxious atmosphere that develops as the truth of David’s identity slowly unravels calls to mind the unnerving tenor of Michael Haneke’s Funny Games (1997), wherein a vacationing family is gradually held hostage in their lake house by strangers who refuse to leave. The criticism Haneke is making in his film regards the elaborate and distressing prominence of brutality as subject matter in media, violence as entertainment. Here’s a happy little family, what did they do to deserve any of this torture? What is truly being said with this depiction? Herein lies the responsibility entrusted to filmmakers to never cross that exploitative line, lest we the audience should accidentally walk into the theater and see the shameless snuff presented in Haneke’s admonitory film.

The Guest doesn’t come close to crossing those same lines, but it isn’t any more thoughtful in how it approaches the violence of its own story. It is shocking, and we the audience are shocked by it, but we get the sense that the film is not. Rather, the film delights in glee with its ability to produce such shocking imagery, to so closely emulate the films it’s clearly inspired by. It’s telling that where the film lacks in story, it substitutes immaculate scenes of deranged chaos. Exactly the thing depicted in Haneke’s movie.

If you are a fan of Wingard’s other works, or if you simply enjoy a good ol’ fashioned slasher film, then you’ll no doubt have a wonderful time watching The Guest. A fabulous cast, a thrilling story, and a distractingly groovy soundtrack await, but once it’s all over you may find yourself reaching for something with a little more foundation, and a little more empathy.

LOVE this theater..OMG. I’ve been here several times now for different events. I’ve attended 2 of the 3 Scott Pilgrim events thrown by Cinemattack. I was even the lucky winner of the Scott Pilgrim album on vinyl. I don’t have a record player..but may as well be a trophy for me because I never win anything! lol. I also attended “The Last Unicorn” event with Peter S Beagle- the author speaking and answering a Q and A afterwards. This was so awesome. I have always loved loved this movie and it was … END_OF_DOCUMENT_TOKEN_TO_BE_REPLACED

I love the Frida, as an avid movie watcher, it’s great to have a place to go where many classic, cult and underrated films are shown. I had the pleasure of attending “The Decline of Western Civilization” screening with director Penelope Spheres doing a Q&A. Her films are so historically important and impacted me at a very young age. I am forever grateful for the experience, like nowhere else would this be possible. I think it’s truly amazing what the staff and everyone involved is doing for the … END_OF_DOCUMENT_TOKEN_TO_BE_REPLACED