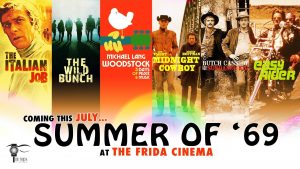 That time when Bambi met Godzilla

“If a young couple goes to the park with a blanket and some food and have a picnic, that’s a G-rating. When they bring a bottle of wine along, then get under the blanket, that’s a PG-rating. If they bring no blanket, no food, but they have a picnic anyway… That’s an R-rating.” — Jane Fonda, summarizing the MPAA’s new film rating system, introduced shortly before the Summer of ’69.

The Motion Picture Association of America (MPAA) had just implemented its own film rating system. Recent films like Sidney Lumet’s The Pawnbroker (1964) and Mike Nichols’ Who’s Afraid of Virginia Woolf? (1966) had edged the oppressive—and increasingly obsolete—Motion Picture Production Code closer to irrelevance. Then MGM released Michelangelo Antonioni’s Blowup (1966) without any MPAA approval. Competition from non-US films and TV—and the growing American counterculture—compelled the MPAA to abandon the Production Code altogether.

The Summer of ’69 — A Climate Unprecedented

“Young directors knew something that [Hollywood studio execs] didn’t know, which was, maybe, what the audiences were looking for. And so there was this climate which made it possible for me to make a lot of movies which I know I couldn’t get made now.” — Paul Mazursky, director of Bob & Carol & Ted & Alice (1969)

Hollywood studios had been making big-budget, star-driven films that fewer people were coming to see. Hello Dolly and Paint Your Wagon were irrelevant to a growing segment of their audience—younger people who were more concerned with the Civil Rights Movement, the Vietnam War, and the Women’s Movement. They turned to younger filmmakers, who could connect them with an audience they had mostly ignored.

… And connect is exactly what these new directors, from the US and other countries, did. The era of the film auteur—highlighted in the 2003 documentary A Decade Under the Influence—may or may not have officially kicked-off in the Summer of ’69, but some of the period’s most memorable and successful films did. Throughout July and August, The Frida Cinema will screening some of these legendary films.

“You’re only supposed to blow the bloody doors off!” — Charlie Croker (Michael Caine)

Considered by many—along with Blowup—to be the film most evocative of 1960s London, The Italian Job is perhaps the British caper film. From its way-cool Quincy Jones soundtrack to costumes which Nik Higgins of Future Movies claims make Austin Powers’ wardrobe appear “drab and grey,” The influence of The Italian Job in our culture cannot be overlooked: at least two remakes, a video game, and countless imitations and parodies.

“The warning that I’ve received—you may take it with however many grains of salt you wish—that the brown acid that they’re circulating around us is not, specifically, too good.”

What would a retrospective about the Summer of ’69 be without Woodstock, the most impactful music festival in American music history, as well as the pinnacle of the 1960s counterculture movement? The Frida Cinema will be screening the definitive director’s cut of the iconic documentary. OK so what if the film actually came out in 1970?

“We all dream of being a child again, even the worst of us. Perhaps the worst most of all.” — Don José (Chano Urueta)

Regarded by many as Peckinpah’s finest film, The Wild Bunch mixes the graphic violence of Arthur Penn’s Bonnie and Clyde with innovative cinematography and editing techniques. It is classic revisionist western, critical of contemporary American society and values as it follows a group of aging bandits whose way of life is slipping away.

A picaresque story of friendship that captured a city in crisis and sparked a new era of Hollywood movies, Midnight Cowboy was nominated for seven Academy Awards, winning three for Best Picture, Best Director, and Best Adapted Screenplay. It is the only X-Rated film in history to win a Best Picture Oscar. The MPAA’s X-rating would not carry its close association with pornography until the success of 1972’s Deep Throat. Today Midnight Cowboy is rated R.

“I couldn’t do that. Could you do that? Why can they do it? Who are those guys?” — Butch Cassidy (Paul Newman)

Far ahead of its time, Butch Cassidy and the Sundance Kid was initially panned by critics due to its unusual pacing set to an anachronistic soundtrack and how it dismantled the mythos of the outlaw by showing a pair of men alternating between panicked and silly. Despite the lukewarm critical reception, the film went on to win four Academy Awards, including for William Goldman’s screenplay and Hal David and Burt Bacharach’s original song, “Raindrops Keep Fallin’ on My Head.”

“You know, this used to be a helluva good country.” — George Hanson (Jack Nicholson)

A distorted reflection of the American Dream, centered on a life free from attachment, Easy Rider—filled with reefer smoke, LSD, and an avant-garde examination of the decimation of counterculture—is essential viewing to understand the evolution of cinema.

What a hidden gem! I had such a lovely time at a recent showing of Godzilla (1954). This theater is a bit timeworn, yet undeniably quaint and charming with an unconventional feel. And interestingly enough, the audience served as the sweet element of surprise. Those in attendance created an atmosphere of delight, comfort, and personal acceptance… and get this.. there was an actual host who presented a brief preface to the film just prior to viewing. Very collegiate, which I loved!  All in all pe… END_OF_DOCUMENT_TOKEN_TO_BE_REPLACED