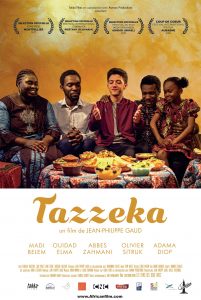 Growing up in the Moroccan village of Tazzeka, Elias learned the secrets of traditional Moroccan cuisine from his grandmother who raised him. Years later, meeting a top Paris chef and a young woman named Salma inspires him to leave home.

In Paris, Elias faces unstable work and financial hardship as an undocumented immigrant. But he also finds friendship with Souleymane, who helps revive his passion for cooking.

“Tazzeka has a lot to say about the passion that fuels people, the way society treats immigrants, and how those two elements interrelate.” –Film Threat

What a hidden gem! I had such a lovely time at a recent showing of Godzilla (1954). This theater is a bit timeworn, yet undeniably quaint and charming with an unconventional feel. And interestingly enough, the audience served as the sweet element of surprise. Those in attendance created an atmosphere of delight, comfort, and personal acceptance… and get this.. there was an actual host who presented a brief preface to the film just prior to viewing. Very collegiate, which I loved!  All in all pe… END_OF_DOCUMENT_TOKEN_TO_BE_REPLACED