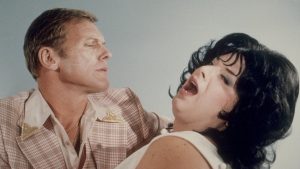 December at The Frida Cinema saw not one but two screenings of Polyester, John Waters’ delightfully trashy send-up of romantic melodramas.

As mentioned in December’s Frida After Dark blog, the comedy’s release marked a scent-sational innovation in the field of Smell-O-Vision. Though far from the first to imagine an aromatic theater experience, Waters made the integration of smell his trademark campy own. Rather than scented mists emitted from a theater seat, Polyester turned a simple scratch-and-sniff mechanism into cutting edge, mad scientist-worthy technology. Thus, Odorama was born, a genius gimmick that left a wave of influence rippling in its wake.

Though no “serious” films have given Smell-O-Vision a whirl since 1981, kids’ entertainment has recognized the potential for gross-out humor and low-cost interactivity perfect for their target demos. But aside from the copyright-infringing Rugrats Go Wild and the forgotten Spy Kids: All the Time in the World, cinema has yet to embrace the nuanced art of stink despite a plethora of films just begging for an aromatic update. After careful contemplation with the sheer power of Smell-O-Vision in mind, I’ve nailed down the films that would best be improved by Odorama!

Cinema is often meant to make you uncomfortable; immersion is among the most important elements to get an audience to truly sympathize with the characters and understand their worldview and motivations. Smelling what our protagonist smells would further bring us into their everyday lives. The trailer for Polyester said it best: “Smelling is Believing”.

In the case of Mark Renton, the decrepit drug den he and his friends inhabit would reek of decaying wallpaper, filthy carpet, and of course, heroin. On an even bigger scale than that, we’d smell the depressive struggle of the Edinburgh youth, trapped in a relapse-inducing “shite state of affairs” that no amount of fresh air can change.

In addition to helping us understand what exactly McGreggor’s character senses in the air when he says “choose life”, a scented version of Trainspotting would drive home the fact that fine film and toilet humor need not be mutually exclusive.

The Worst Toilet in Scotland

Fresh Air: A temporary relief, though in the end, it won’t make a difference.

While contemplating smelly cinema, I found it was actually fairly difficult to find aromatic films not centered around food. Though this is understandable since our senses of taste and smell are uniquely intertwined, there are plenty of scents that aren’t necessarily related to food.

Then, it came to me: the floral euphoria that would be Walt Disney’s Alice in Wonderland. Though not the most obvious choice, it’s no question that Wonderland would be a trip for the nose, to say nothing of the mind.

From the opening scene in a lovely English meadow, the charming song “In a World of My Own” is heard while Alice is cradled in a bed of white daisies that surely smells as sweet as it looks. Though the fragrant delights begin even before Alice falls down the rabbit hole, Wonderland provides plenty of potential scent-sations to accompany her episodic adventures.

Shortbread Cookie: Those “Eat Me” biscuits have always looked delicious

Golden Afternoon: A Floral perfume, with a hint of Bread-and-Butterflies.

Paint: For painting the roses red

Shrek may forever be meme-ified but its inclusion on this list is no joke. I don’t think there’s a single animated flick that could utilize Odorama for gross-out purposes like Shrek could – hell, the whole franchise begins in an outhouse! Scented tie-ins would come as naturally as gas since stink is a core characteristic of who Shrek is. By not properly bringing to life this side of him when we have the technology, it does a great disservice to the world’s favorite ogre.

Though we might not be fond of all that wafts our way, there’d be some genuinely wholesome moments for your nose on the journey to Duloc, just like the film itself. Though it’d be an odor-heavy beginning and middle, the happily ever after ending would pack a pungent punch to linger in your nostrils for a good while.

From one enchanted, swamp-green flick to another, The Princess and the Frog is where food really begins to shine on this list.

Naturally, a protagonist with a talent for cooking and a dream of running her own high-class restaurant makes for a lot of delicious-looking food on screen. Though Tiana is famous for her beignets, her savory dishes look just as mouthwatering. On top of that, the air of 1920s New Orleans would be especially rife with fried goodness during Mardi Gras, an entire holiday dedicated to decadence and indulgence.

The most exciting opportunity this film provides however, is an opportunity to draw from the real-life abundance of rich aromas found in folk magic. Like many other practices that are derivative of indigenous traditions (Santería, Hoodoo, Wicca etc.), New Orleans Voodoo features the power of herbs, spices, roots, and incense, which can be utilized to both heal and harm. If you’ve been to a mercado de brujas or even a store that sells tools for meditation, you know just how strong these ingredients can be.

Champagne: Despite taking place during Prohibition, this scent would undoubtedly be known to the characters.

Hands-down, Willy Wonka’s chocolate factory would be one of the most enchanting places to bring to life with Odorama. Willy Wonka even boasts the most tantalizing opening of all time, giving you the chance to feast your eyes on more chocolate than you’ll probably ever see in your non-chocolatier life. Impressively following that up, “The Candy Man” number in a sweets shop bombards us with even more sugary goodness you can practically smell already. What kind of cream is in a Triple Cream Cup? What aroma could a Squelchy Snorter or a Sizzler exude? What makes the Scumdiddlyumptious so dang scrumptious?

With endless odor possibilities, the mystery of what exactly is in Wonka’s candy that makes even adults go absolutely bonkers could only be enhanced with an olfactory addition. By aroma-fying this flick, we’d finally be able to say, once and for all, that the snozzberries do smell like snozzberries.

This pick may come as a bit of whiplash from the technicolor world of Willy Wonka, but it’s undeniably justified.

The Lighthouse is miserable in every way; it’s the filthiest movie without being purely toilet-based – though it definitely spends a lot of time in that territory. After a stunning opening sequence among the ocean mist, we’re blasted in the face by unabashed flatulence and urination. Willem Dafoe is theatrically trained to fart on command and we should fully appreciate that, dammit!

It’s hard to tell whether the gorgeous use of black-and-white emphasizes the grime or makes it more palatable. What’s certainly not palatable is a mouthful of dirt or kerosene cocktails.

Unlike the previous films on this list that feature at least a moment of pleasant reprieve among the putrid, there’s no relief in sight on this rock. From the old, waterlogged wood to the constant sweat and rotting sea life debris, it’s without a doubt the crustiest, muckiest, most mud-caked film in recent memory. Hell, Winslow even cites the rancid stench as a key factor that’s driving him mad, in what is surely one of the finest roasts of the 1800s. Surely after 110 minutes of olfactory assault featuring “goddamn farts”, jissom, and “curdled foreskin”, we’d be just as ready to snap Tommy and yearn for escape amidst The Light.

Kerosene: Please don’t drink this, even with honey.

If this pick for the top spot seems obvious, it’s for all the best reasons. Ratatouille is the ultimate love letter to food and certainly one of the finest installments of Pixar’s filmography. What many might have forgotten, however, is that the film isn’t just about a rat’s unique appetite – it’s about his spectacular sense of smell as well! Remy’s keen nose is what allows him to think beyond food as simple sustenance, and spurs his flavor intuition that leads him to become head chef of his own restaurant.

Two of the most iconic scenes depicting taste and memories bookend the film at its beginning and end. The famous Chef Gusteau himself describes good food as “music you can taste, color you can smell.” Furthermore, in the perfect illustration of the power of nostalgia, Remy’s ratatouille shatters the icy heart of Paris’ harshest critic, parallel to scent’s unique ability to conjure long-latent memories.

Though there’s some nasty smells that’d be typical of a rat’s point of view, this contrast makes the savory delights of French cuisine that much more divine.

A few honorable mentions that may be worth a sniff:

James and the Giant Peach (1996): Peach, Peach, and Even More Peach