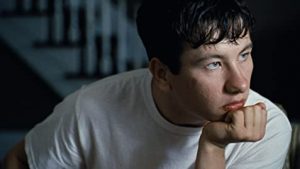 As the COVID-19 pandemic in America shows no signs of stopping, movie studios continue to delay new releases seemingly every week until public safety in theater spaces can be guaranteed. This cultural stasis deprives us of new stories, new images, and new contributions to the cinematic arts, but it’s a small price to pay for safety.

Tragically, two new films featuring Dublin native Barry Keoghan (key-oh-gun) were also deprived of their 2020 release: David Lowry’s The Green Knight, and Chloe Zhao’s Eternals. Two roles that should fit well with the 27 year-old’s already dynamic body of work. Like what our writer Austin Bittner described in his Christopher Abbott Trilogy, truly great supporting actors give you the impression that their best work is still ahead of them. Making their early creative period all the more exciting to follow.

While we count down the days until these new films can be released, let’s return to three performances from Keoghan’s already burgeoning career to see an exciting young artist at work.

“It was a confused situation. In these circumstances, what you saw, what you think you saw, can be a very different thing to what actually happened. Do you understand?”

Yann Demange’s camera is as restless as the North Irish Troubles themselves in his period war drama debut, ‘71. Elaborate tracking moves, zooming lenses, and erratic handheld sequences lend a verite realism to this harrowing tale of survival during the unrest in early seventies Belfast.

British military Private Gary Oak (an electrifying Jack O’Connell) gets separated from his squad during a search mission in Northern Ireland, and must evade capture from provisional IRA operators that encircle him on all sides. Enter Barry Keoghan as Sean Bannon, one of the IRA soldiers on Gary Oak’s tail.

While refusing to contextualize the greater political situation at large, Demange’s story takes on a new light. It is not a historical document of the situation in North Ireland, but rather it uses those events as a backdrop to indict the corruptibility of law and order, the entropic decay of power structures and hierarchy. Crooked cops, crooked soldiers, crooked rebels; all compete for control over the course of this kinetic and thrilling film.

From his first appearance in a sensational early scene, Keoghan exudes a magnetism that transcends many of the other tremendous character performances in this film; Sean Harris, Valene Kane, Martin McCann, and David Wilmot all turn in wonderful work, but are restrained by plotty gangster film dialogue.

Keoghan meanwhile, casts an ominous presence over the film with nary any lines whatsoever. Sean Bannon is a bottled and fascinating young man whose demeanor can shift faster than you can say ‘Get the guns!’. Only in two revealing moments of domesticity does Sean break his silent facade, showing us two lives living in the same body: a radical fundamentalist, and a scared young boy that loves his family.

We now arrive at a star making role for Keoghan in Yorgos Lanthimos’ clinical and disturbing greek tragedy, The Killing of a Sacred Deer – yet another example of a stellar ensemble cast orbiting around a singularly engrossing, and mesmerizing performance from Keoghan. The compassionate humanism he brings to ‘Sean’ in ‘71, becomes corrupted to suit his role as the inhuman sixteen-year-old Martin – a rare villain in Keoghan’s oeuvre.

Following the death of his father during heart surgery, Martin befriends the surgeon who performed the operation – Dr. Stephen Murphy (Colin Ferrell, playing a man who is somehow even more repressed than his ‘David’ character in The Lobster (2015)).

Now Martin is a real creep – it makes sense why Keoghan would want to avoid being typecast as such. We sympathize with Dr. Murphy who’s repulsed by Martin’s stilted and awkward etiquette, but we also recognize Martin’s untreated trauma infecting his judgement. What follows is an anxious and terrifying dramedy of manners as Lanthimos follows his characters through hospital hallways, suburban sidewalks, and suffocatingly modern homes like a phantom. His camera observing with twisted curiosity each character’s deepest, and darkest confessions slowly coming to surface.

In the wrong hands, Martin could have felt like an empty and generic villain; too showy of a performance rendering it parody, while a total lack of personality rendering his revenge unbelievable. Keoghan strikes a balance here, knowing when to emphasize his threats within the membrane of small talk and pleasantries that pervade the movie. It’s a haunting bit of work that’s sure to be remembered as one of the greatest performances of the recent era.

“It doesn’t work like that in real life. Bad guys, they don’t get to ride off into the sunset with the money.”

If Bart Layton’s exhilarating docu fiction exposé, American Animals, has a reputation beyond being one of only three films acquired by the now defunct MoviePass Ventures, it will be for featuring Barry Keoghan in one of the more introspective, and as a result more complicated roles of his early career. Keoghan swings his character pendulum back and forth, this time shifting to Spencer Reinhard, an art major who has a nifty idea to rob his own university of priceless masterpieces.

Keoghan’s sheepish performance stands out in contrast to the sinister tone of his previous two characters. In American Animals, he swings so far in the other direction, you could easily imagine Keoghan in the role of Gary Oak in ‘71 – scared, unsure, out of his element. By playing more or less a straight man to Evan Peters’ erratic ringleader character Warren, Keoghan is given ample opportunity to demonstrate his comedic sensibilities and timing, however brief.

The entire premise of Layton’s heist procedural relies on Spencer and Warren’s total lack of existential conflict that, in and of itself, guides their reckless behavior. A self-imposed, self-fulfilling prophecy, aided by boredom and too many movies. Such is the ennui of 21st century collegiate life.

A cautionary true crime tale, and an indictment of American educational paradigms, this fascinating hybrid film will no doubt leave you wanting more from Keoghan. In the meantime however, please continue wearing your mask and staying indoors whenever possible. The sooner we beat this virus, the sooner we can see new Barry Keoghan movies!

LOVE this theater..OMG. I’ve been here several times now for different events. I’ve attended 2 of the 3 Scott Pilgrim events thrown by Cinemattack. I was even the lucky winner of the Scott Pilgrim album on vinyl. I don’t have a record player..but may as well be a trophy for me because I never win anything! lol. I also attended “The Last Unicorn” event with Peter S Beagle- the author speaking and answering a Q and A afterwards. This was so awesome. I have always loved loved this movie and it was … END_OF_DOCUMENT_TOKEN_TO_BE_REPLACED

What a hidden gem! I had such a lovely time at a recent showing of Godzilla (1954). This theater is a bit timeworn, yet undeniably quaint and charming with an unconventional feel. And interestingly enough, the audience served as the sweet element of surprise. Those in attendance created an atmosphere of delight, comfort, and personal acceptance… and get this.. there was an actual host who presented a brief preface to the film just prior to viewing. Very collegiate, which I loved!  All in all pe… END_OF_DOCUMENT_TOKEN_TO_BE_REPLACED