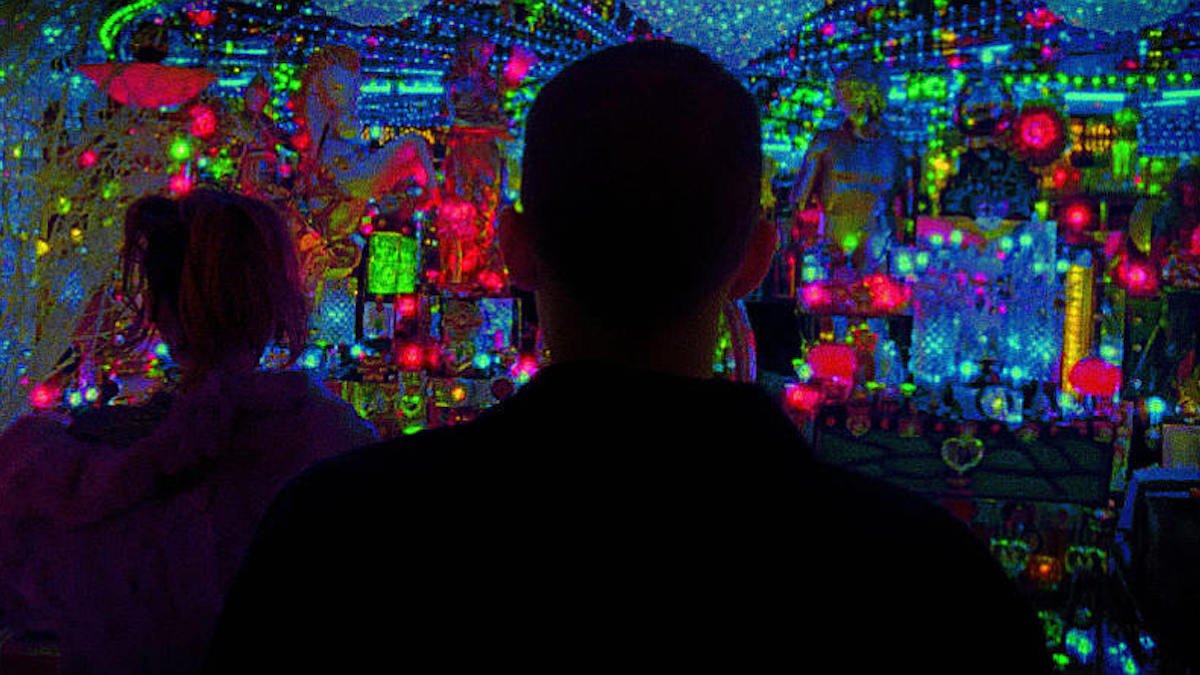 Get ready for a most colorful May at the Frida with NEON NIGHTMARES! Originally slated to debut in 2020 right before the pandemic hit, this long-awaited series is finally premiering on our screen starting Friday, May 5th! Including American thrillers, European art films, and everything in between, each aesthetically-appealing entry is guaranteed to engage viewers on a sensory level as well as a narrative one. Directors whose filmographies we drew from include Dario Argento, Nicolas Winding Refn, the Sadie brothers, and Alfred Hitchcock, while Gaspar Noe has the distinction of having two of his films playing throughout the month. So grab a pair of rose-tinted glasses and spend your month in a hypnotically-hallucinatory world!

Oscar (Nathaniel Brown) lives with his sister in Tokyo, where he supports them by dealing his own drug of choice, DMT. On a delivery one night, he learns about The Tibetan Book of the Dead and how a soul can find reincarnation in the afterlife. When he is shot by police later that night, Oscar undergoes an out of body experience where he looks at memories of his past, loved ones after his death, and a psychedelic experience of rebirth.

Béatrice Dalle and Charlotte Gainsbourg star as themselves, a director and a lead actor (respectively) in the process of shooting a film about witches. As the time approaches to shoot the film’s climactic witch-burning scene, tensions among cast and crew start to boil over. Minor spats and on-set drama spin out of control, and the production descends into screaming chaos.

When young dancer Suzy (Jessica Harper) travels to attend a prestigious ballet school in Germany, she arrives on a late, stormy night. Instead of being let inside, she witnesses fellow student Pat (Eva Axén) fleeing from the school in a panic before she is mysteriously murdered. As more people die, Suzy finally uncovers the long, terrifying secret history of the place.

Robert Pattinson plays “Connie” Nikas, a New York City bank robber. Determined to free his brother from prison, Connie sets out on a nightlong odyssey through the city’s criminal underworld. Dark and dangerous, it’s a risky environment for Connie to maneuver as he races to save his brother.

Elle Fanning stars as Jesse, a 16-year-old girl who moves from Georgia to LA in hope of becoming a model. Faced with pressure from industry insiders, she misrepresents aspects of herself like her age and sexual activity in order to fit in. It seems to be a winning strategy at first, but Jesse starts to crack as the world she so desperately wanted to be a part of shows itself for what it really is.

Detective John “Scottie” Ferguson (James Stewart) faces retirement after his fear of heights causes the death of a fellow officer. When an old college friend pays him to play private eye and follow his wife Madeleine (Kim Novak), who he feels might be possessed by a spirit, he proceeds to follow the mysterious woman through the beautiful streets, buildings, and parks of San Francisco – Bernard Herrmann’s hypnotic score accompanying them and adding to the increasingly ominous atmosphere. When tragedy strikes, a Pandora’s Box of lies, deceit, and one shocking revelation after another is unleashed.