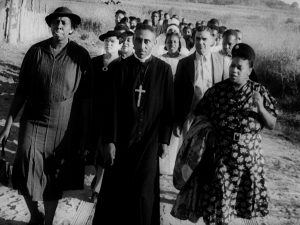 The first feature by director/actor Spencer Williams (commonly remembered today as Andy on TV’s Amos ’n’ Andy), THE BLOOD OF JESUS, is a rural religious parable in which a woman (Cathryn Caviness), accidentally shot by her husband (Williams), travels to the crossroads of the hereafter, and faces the temptations of the devil himself (replete with pitchfork, horns, and cape). Williams appropriated footage from Roman Freulich’s 1936 inspirational short Broken Earth (starring Clarence Muse) to add stylish production value to this low-budget drama—but he proves to be quite the stylist himself with the images of the leering Satan and the stunning finale in which the protagonist falls to the foot of a cross and is bathed in the literal blood of Jesus, a moment that is both visually surreal and unexpectedly poignant. Williams returned to religious allegory with his similarly-themed Go Down, Death! in 1944. In 1991, THE BLOOD OF JESUS was selected to the National Film Registry of The Library of Congress.

LOVE this theater..OMG. I’ve been here several times now for different events. I’ve attended 2 of the 3 Scott Pilgrim events thrown by Cinemattack. I was even the lucky winner of the Scott Pilgrim album on vinyl. I don’t have a record player..but may as well be a trophy for me because I never win anything! lol. I also attended “The Last Unicorn” event with Peter S Beagle- the author speaking and answering a Q and A afterwards. This was so awesome. I have always loved loved this movie and it was … END_OF_DOCUMENT_TOKEN_TO_BE_REPLACED