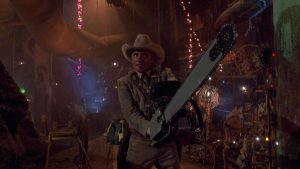 Thanks to our friends at Bombs Away Show, The Texas Chainsaw Massacre 2 is on its way back to The Frida Cinema! Departing from the chilling tone of the original, Tobe Hooper’s sequel has a goofy energy all its own and is a surprisingly worthy follow-up. On that note, let’s take a look at what I consider to be the five best horror sequels.

Handpicked by 21 Days Later‘s director Danny Boyle to take his place, Juan Carlos Fresnadillo had the good sense to realize that you can’t fray the same nerves twice when he helmed the follow-up. Set in the immediate aftermath of the first film, the sequel starts with Britain trying to get back on its feet and ends with the world on its knees. 28 Weeks Later was a real game changer for the horror genre, providing a very intense and dark look at England after the fall. It’s a real take-no-prisoners type of horror film and not only retains the story of the original so well but also the style that Boyle had originally created.

After Halloween, John Carpenter wasn’t too sure if there would be a sequel due to many disputes with producers. Fortunately however, Carpenter went on to make the sequel, picking up right where the last one left off with the search for Michael Myers body (which, let’s not forget, was riddled with bullets at the end of the first film…) Carpenter wasn’t tapped to direct the sequel though. Instead, the reigns were turned over to Rick Rosenthal, who maintained the original’s suspenseful pacing throughout, showed care for both character development and gore, and gave us some of the most visceral scenes in any horror film ever seen.

Anyone following up Ridley Scott’s masterpiece Alien would have to be a master of sci-fi themselves, so it’s only fitting that James Cameron was tapped to direct when the sequel finally came rolling around. This brought a whole new level of expectation not only for the series’ overarching narrative but for the genre of sci-fi horror itself. Aliens set a very high bar for others in that genre, eschewing the slasher-esque scares of the original for enthralling action. It would be easy for James Cameron to try and recreate what had came from the first film, yet he chose to take a huge risk and make it his adrenaline-pumping own.

The old trope of just ramping up everything to make the sequel more than the original is something that’s often seen when trying to make a follow-up to a successful movie. The original Evil Dead film was released independently while working with a very small budget but the imagination and ingenuity went way above what the resources they were working with. When it came time for the second film, Sam Raimi knew exactly what to do.

Played with way more gory slapstick and laughs than the original, it feels like each scene is trying to one up the others, as seen in the very beginning when Ash lops off his possessed girlfriend’s head before cutting off his own hand. Raimi made extensive use of experimental camera work and crazy ideas such as Ash jamming a chainsaw into his handless stump of an arm and then going to demon-slaying work. The film does everything a great horror sequel should: that is, elevating and enhancing the scares while keeping the intentions of the first film in mind.

Between his zombie classic Night of the Living Dead and the countless sequels, parodies, and remakes it inspired, it’s fair to say that George A. Romero may be the most influential horror director ever. However, none of his projects nor the imitators they inspired stand out quite like 1978’s Dawn of the Dead. In this movie, Romero revisited the zombie apocalypse he created in 1968 to present new themes, challenging filmmaking techniques, and comments on society like the pitfalls of consumerism. It would be hard to find another horror film that tells such a good horror story while also working in all the allegorical messages that Romero puts in.