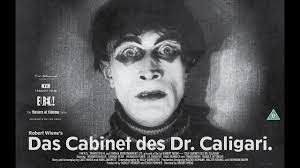 The Cabinet of Dr. Caligari, one of cinema’s earliest horror movies, turns 100 this year. This silent film by German director Robert Wiene tells a dark tale of a traveling hypnotist named Dr. Caligari (Werner Krauss), who manipulates a sleepwalker (Conrad Veidt) into committing murders. When the hypnotist arrives in town with his minion, a young man, Francis (Friedrich Fehér), finds his life suddenly overturned by the murder of his best friend (Hans Heinz v. Twardowski) and the disappearance of his fiancée, Jane (Lil Dagover).

Perhaps the most striking aspect of Caligari is its aesthetic style, characterized by harshly slanting lines and dark psychological themes. What results is an eerie, off-kilter world, rife with uncertainty and danger. This style, which came to be known as German Expressionism, came about in Germany in the tumult of the First World War, when the government placed a ban on foreign films. In this isolation, a new artistic movement took root. Expressionism’s emphasis on non-realistic, irregularly geometric set design and themes of madness and betrayal evokes the cultural trauma of World War I — and, more immediately, allowed set designers to compensate for their productions’ lack of lavish budgets; inflation was on the rise in Weimar, Germany.

Though one of the earliest, Caligari is far from the sole example of Expressionism in German cinema. The effects of the war lingered, and social unrest in Germany only continued to mount. F.W. Murnau’s 1922 silent film Nosferatu features perhaps the most famous movie vampire and builds fear around the dangers of a shadowed, creeping threat. M, a 1931 thriller directed by Fritz Lang, depicts a manhunt for a serial child killer (Peter Lorre), as he tries and fails to suppress his murderous urges, exploring themes of human depravity and the meaning of justice. With fascism on the horizon and the social climate becoming ever more turbulent, Expressionism’s aesthetic of dark visuals and even darker subject matter seems to be a natural outcome.

Wiene, Murnau, and Lang all fled Germany in the late 1920s and the early 1930s as the country descended into fascism. Wiene traveled throughout Europe, but his filmmaking career didn’t pick back up before his death in Paris in 1938. Murnau and Lang, however, emigrated to Hollywood, where Expressionism had a significant influence on American horror films, such as Dracula (dir. Tod Browning, 1931). German Expressionism’s characteristic chiaroscuro lighting and tales of madness and murder had also inspired directors such as Alfred Hitchcock, Orson Welles, and — most recently — Tim Burton.

A century is a long time, but it seems that we have once again found ourselves in strange and uncertain times. As we try to balance our new realities with the task of simply getting through daily life, we have collectively turned to the creation and consumption of art, either to process our experiences or to escape them. If we, in 2020, are to take anything from Caligari and German Expressionism, perhaps it should be the knowledge that whatever troubles we face, we will be seen and heard even a hundred years from now.

I love the Frida, as an avid movie watcher, it’s great to have a place to go where many classic, cult and underrated films are shown. I had the pleasure of attending “The Decline of Western Civilization” screening with director Penelope Spheres doing a Q&A. Her films are so historically important and impacted me at a very young age. I am forever grateful for the experience, like nowhere else would this be possible. I think it’s truly amazing what the staff and everyone involved is doing for the … END_OF_DOCUMENT_TOKEN_TO_BE_REPLACED