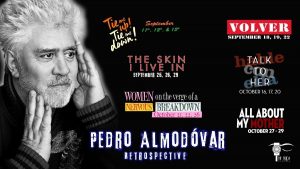 In anticipation of the upcoming 70th Birthday of one of our favorite filmmakers, and in celebration of Hispanic Heritage Month, The Frida Cinema is proud to present a Lobby Art Show, and six classic films, by Spanish auteur Pedro Almódovar.

Born in the remote town of Calzada de Calatrava on September 25, 1949, Pedro Almodóvar Caballero attended a religious boarding school before discovering his true passion, the art of cinema. As soon as he was eligible, he went to Madrid and sought to enroll at the National School of Cinema. Unfortunately, the country’s dictator Francisco Franco decided to shut the institute down, forcing Almódovar to teach himself the art of filmmaking.

It was an education that clearly paid off, as Almódovar has become one of the world’s most celebrated filmmakers. A winner of two Academy Awards and five British Academy Film Awards, he has also received four prizes at the Cannes Film Festival, as well as honorary doctoral degrees from Harvard and Oxford.

With their fearless approach to such issues as faith, family and sexuality, it’s easy to see why Almódovar’s films have captivated critics and audiences alike. We are proud to honor this uncompromising voice in cinema with our retrospective!

The Frida’s Almodóvar retrospective starts with his controversial film Tie Me Up! Tie Me Down!

Having just been discharged from a mental facility, lonely orphan Ricky (Antonio Banderas) fixates upon Marina (Victoria Abril), an actress with whom he once had a one-night-stand. He goes to meet her, but she doesn’t remember their encounter and dismisses him. Desperate, Ricky abducts her in the hope that she will eventually fall in love with him. As Marina’s worried sister Lola (Loles Leon) searches for her, she starts to develop feelings for him. Will Lola ever find Marina? If she does, will Marina want to leave Ricky?

Notable for being one of the first films to receive an NC-17 rating, Tie Me Up! Tie Me Down! also has the distinction of introducing star Banderas to American audiences for the first time.

Our Almodóvar retrospective continues with Volver, a decorated love letter to the director’s childhood in Spain and a warm homecoming for fans of his early work.

Hard-working mother Raimunda (Penélope Cruz) lives in suburban Madrid with her husband Paco and daughter Paula. After a familial altercation results in Paco’s murder, Raimunda must handle the disposal of his body along with supporting her sister Sole (Lola Dueñas), running a restaurant and grieving after the death of their beloved Aunt Paula (Chus Lampreave). As if that all weren’t enough, Raimunda’s late mother is believed to be spotted in town.

Despite dark themes as death, murder, incest, and rape, Volver is a spirited slice-of-life with a distinctive feminine presence. Penélope Cruz gives a wonderfully honest performance in the lead role which earned her an Academy Award Nomination for Best Actress.

The third selection in our Almodovar retrospective is The Skin I Live In, a genre-bending entry from the Spanish director.

No retrospective of Almodóvar would be complete without the provocative Talk to Her —considered by many to be one of the finest films of the 2000s.

After an encounter at a local performance of Café Müller, male nurse Benigno Martín (Javier Cámara) and travel writer Marco Zuluaga (Darío Grandinetti) find their lives remarkably paralleled when they meet again in the same hospital ward. The two men quickly transition from strangers to friends, even through the shocking discovery about one of the patients that draws them apart.

Like much of Almodóvar’s filmography, the movie boasts numerous accolades such as the Academy Award for Best Original Screenplay. An understated approach for the director, Talk to Her delves into the dynamic of love and unrequited infatuation.

Our celebration of Almodóvar continues with his 1988 screwball comedy Women on the Verge of a Nervous Breakdown.

Loosely based on the play The Human Voice by Jean Cocteau, the film follows actress Pepa (Carmen Maura) as she attempts to cope with a sudden breakup with her boyfriend Ivan (Fernando Guillén). While Pepa frantically attempts to reach Ivan and contemplates suicide in response, she is interrupted by her friend who also is also suffering from her own relationship problems. As the day goes on, an unlikely string of visitors arrive at Pepa’s apartment and set in motion a deranged farce of odd connections and frustrated passions.

Women on the Verge brought Almodóvar, already well known in Spain, international fame with its manic humor and rich visuals. The film marked a turning point in his career, departing from urban black comedies to this dreamlike vision with a lighter touch that shows the absurd ways women hurt for love and the hilarities that arise from this desperation.

The Frida’s Almodovar retrospective ends on a fitting note with the touching drama All About My Mother.

Manuela (Cecilia Roth) is the perfect mother, working hard as a nurse to build a comfortable life for herself and her teenage son. Yet one tragic day Manuela sees her only son die as he runs to seek an actress’ autograph on his birthday. With her world completely shattered, Manuela returns to Barcelona in search of her son’s father only to encounter a colorful group of characters that begin to treat her like family.

Garnering Best Foreign Film at the Oscars and Best Director at Cannes for Almodovar, All About My Mother is an existential film that thoughtfully deals with feminism, faith, and redemption.

I love the Frida, as an avid movie watcher, it’s great to have a place to go where many classic, cult and underrated films are shown. I had the pleasure of attending “The Decline of Western Civilization” screening with director Penelope Spheres doing a Q&A. Her films are so historically important and impacted me at a very young age. I am forever grateful for the experience, like nowhere else would this be possible. I think it’s truly amazing what the staff and everyone involved is doing for the … END_OF_DOCUMENT_TOKEN_TO_BE_REPLACED

What a hidden gem! I had such a lovely time at a recent showing of Godzilla (1954). This theater is a bit timeworn, yet undeniably quaint and charming with an unconventional feel. And interestingly enough, the audience served as the sweet element of surprise. Those in attendance created an atmosphere of delight, comfort, and personal acceptance… and get this.. there was an actual host who presented a brief preface to the film just prior to viewing. Very collegiate, which I loved!  All in all pe… END_OF_DOCUMENT_TOKEN_TO_BE_REPLACED

LOVE this theater..OMG. I’ve been here several times now for different events. I’ve attended 2 of the 3 Scott Pilgrim events thrown by Cinemattack. I was even the lucky winner of the Scott Pilgrim album on vinyl. I don’t have a record player..but may as well be a trophy for me because I never win anything! lol. I also attended “The Last Unicorn” event with Peter S Beagle- the author speaking and answering a Q and A afterwards. This was so awesome. I have always loved loved this movie and it was … END_OF_DOCUMENT_TOKEN_TO_BE_REPLACED