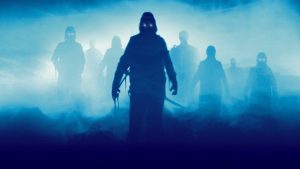 I first watched The Fog with my mom when I was around twelve or thirteen years old. It marked the first John Carpenter film I ever watched; perhaps that is why it continues to have a lasting impression on me. My mom owned an MGM Special Edition DVD from 2005. I remember walking into her room and seeing ghost pirates on her small TV screen. I was instantly caught up in the story,

While I grew up watching crappy movies on the SciFi Channel (now stylized SyFy), The Fog marked the point when I first became invested in the horror genre. Shortly after, I decided to at least watch all the major films I could get my hands on  (The Exorcist, Halloween, Psycho, Friday the 13th, etc.). This led to a lot of trips to Blockbuster (RIP) and me becoming a bonafide horror fan (and now academic).

What made The Fog compelling at the time was how one of its main characters, Father Malone (Hal Holbrook), was a Catholic priest. I hadn’t seen priests in horror films prior to that moment. Being raised Catholic, I was able to connect with the character and understand his spiritual dilemma. Upon finding his grandfather’s diary, he becomes attuned to the horror and revisionist history that surrounds the founding of the coastal community he serves.

If that’s not enough, unexplained supernatural phenomena have been occurring around town. Gas pumps start on their own. Car horns blare. A clock face cracks. A mysterious piece of driftwood appears on the shore with the etched words “Elizabeth Dane” that later change to  “6 Must Die.”

Then there’s that fog. It envelopes everything in its path and appears to have a mind of its own. At one point the fog bank moves against common weather patterns. The fog itself is more frightening than the actual ghost pirates. Growing up in Visalia, CA, located in the heart of the San Joaquin Valley, I can attest that driving through fog is one of the scariest things imaginable. When driving down country roads when the fog rolls in—so thick that you can’t see past the front bumper of your vehicle—many people will slow their car to a crawl, pull as far over to the right edge of the road so they don’t drift over the median strip, and count the mailboxes they pass to discern their relative location. One time, I was driving home with my friend Dillon. As we turned onto the offramp from Highway 99-N to Highway 198-E, we couldn’t see anything in front of us. We proceeded at less than 5 miles an hour, practically straddling both lanes to make sure we executed the sharp turn correctly, lest we roll into a ditch. At one point I stupidly turned the brights on, temporarily making it impossible to see. Thankfully, no one came roaring down the offramp behind us, otherwise my truck would have been rear-ended with full force.

Because of the fog bank, John Carpenter’s film excels in conjuring atmosphere. Produced during a time where the slasher genre Carpenter inspired was experiencing its heyday—and becoming increasingly more violent—and plagued by a number of reshoots after negative test screenings, The Fog’s “less is more” approach is arguably more effective. By showing no blood, Carpenter instead focuses his energy on building suspense through editing and pacing. There are a few jump scares, but the film holds less in common with other films of the late 1970s and early ’80s (with the exception of Gary Sherman’s Dead & Buried, co-penned by Alien screenwriter Dan O’Bannon), than it does with its gothic antecedents like The Innocents or The Haunting.

While some may quibble at occasional plot inconsistencies, such as the reason why the ghost pirates stalked their particular six victims—apparently the novelization details how they are direct descendants of the original six conspirators—I think such a criticism misses the point. From the first frame, Carpenter frames the film as a ghost story. Mr. Machen (John Houseman) sets the scene with his tale to a bunch of children camping on the beach. The history of telling ghost stories extends back hundreds of years, one of the most common traditional times being  Christmas Eve in Victorian England. Novels, such as Henry James’ The Turn of the Screw and Susan Hill’s The Woman in Black, carry on this tradition in literary form. Here, Mr. Machen announces the stroke of midnight with the story of shipwreck that contextualizes the backstory of the narrative. It sets the film’s tone by planting a creeping sense of dread in the viewer’s mind. This is complemented by Carpenter’s sparse piano-synthesizer score.

Since my initial viewing, The Fog has become my favorite John Carpenter film. It even inspired me to write a meta short story while a college undergraduate. As the film approached its 40th anniversary, StudioCanal released a 4K restoration. Viewing it projected at the Frida Cinema, I never imagined the film could look so vibrant and clear. Although the story takes place on April 21st, The Fog remains a perfect Halloween season treat for those looking for a good ghost story.

LOVE this theater..OMG. I’ve been here several times now for different events. I’ve attended 2 of the 3 Scott Pilgrim events thrown by Cinemattack. I was even the lucky winner of the Scott Pilgrim album on vinyl. I don’t have a record player..but may as well be a trophy for me because I never win anything! lol. I also attended “The Last Unicorn” event with Peter S Beagle- the author speaking and answering a Q and A afterwards. This was so awesome. I have always loved loved this movie and it was … END_OF_DOCUMENT_TOKEN_TO_BE_REPLACED

I love the Frida, as an avid movie watcher, it’s great to have a place to go where many classic, cult and underrated films are shown. I had the pleasure of attending “The Decline of Western Civilization” screening with director Penelope Spheres doing a Q&A. Her films are so historically important and impacted me at a very young age. I am forever grateful for the experience, like nowhere else would this be possible. I think it’s truly amazing what the staff and everyone involved is doing for the … END_OF_DOCUMENT_TOKEN_TO_BE_REPLACED