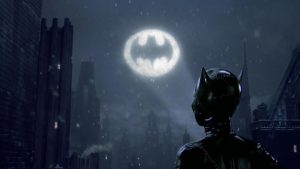 Where do I even start? This is probably the only question one can ask when they have just watched Batman Returns for the first time only two hours ago, and it’s gradually becoming more difficult to imagine returning to the version of myself who had somehow spent 24 years unaware of the operatic, relentlessly Gothic, kink-laden masterwork that Tim Burton dove headfirst into creating. And yet, for its cosmic level of irreverence on full display– from Danny DeVito sailing through a sewage system on a giant rubber duck, to Michelle Pfeiffer exiting out of a scene by doing an endless amount of backflips, slowly rising through the drains of those snowy metropolitan streets is an undercurrent of tragedy and intersecting trauma. You only need to watch the opening minute of  to realize that your preconceived notion of what a Batman film directed by Tim Burton would look like is probably far closer here than it was with his previous Batman film, which is 100% telling of just how much creative control Burton was given with the sequel.

From a production that took up more space of the Warner Brosthers studio lot than any other (at least at the time), to Burton personally hiring Heathers screenwriter Daniel Waters to flesh out the character of The Penguin–played to iconoclastic and repulsive degrees by a pre-Frank Reynolds-era Danny DeVito. And in spite of the bounty of madness, it all comes together in a beautifully bizarre, expressionistic, and wholly singular piece of work. And yes, one is that absolutely bustling with an energy more horny than not just any superhero film from the 28 years since its release, but probably any Christmas movie ever made. I hope just about everybody had already accepted this as a Christmas movie, by the way. Because it is.

Waddling in the sewers beneath the citizens of Gotham City is a penguin, as well as an army of others. These penguins are led by Oswald Copplepot– the titular Penguin–who as an infant was abandoned by aristocratic parents that couldn’t bear his deformities. His fingers fused together until hands become flippers, a pale nose long enough to resemble an icicle, and the tar-like fluid releasing from his mouth with each raspy word spoken. In control of a circus troupe gone rogue named The Red Triangle Gang, Copplepot uses an ambush on ground level to kidnap the wealthy philanthropist/industrialist hybrid Max Shreck–played by one Christopher Walken–whom Copplepot blackmails to help redeem his status as an upstanding citizen. In the midst of this, Shreck has proposed to build a power plant which in actuality is a cover-up to drain Gotham City of its power. The fact that Shreck shares the same name as the actor who infamously played Nosferatu is but a mere indication of his sinister plans. But who discovers this? You’d think Batman, of course. But Bruce Wayne–played by Michael Keaton–doesn’t have a full scene of dialogue until nearly forty minutes into the film. Burton instead takes time to establish the arcs of the new (and honestly, far more compelling) characters, including Selina Kyle–played to an immeasurably risqué prowess by Michelle Pfeiffer–the awkward assistant who uncovers this evidence, and is subsequently attempted to be rid of by Shreck. But such an attempt only gives her a true sense of identity, and in the trashing of her pastel-colored apartment, and the sewing of skintight leather, Catwoman is born in the shattered neon lights of her bedroom, signaling that Hell is here, and revenge is to be had.

Such is the tale of three outcasts–Wayne, Copplepot, and Kyle. Lost souls searching for meaning in the vast grandness of an unloving metropolis. Can the answers to their individual traumas be found? Can you truly use love to redeem a corrupted soul? Can a penguin responsibly use a jet pack? These are only too little a fraction of the questions that Burton and Waters dare to ask. But within the brooding atmosphere and occasional bits of shockingly misanthropic violence is the overt amount of fun to be had in nearly every scene. From the camera that swoops across gorgeously elaborate miniature sets, to the city-street brawls that find Burton using his ability to render live-action through a vast cartoon logic to unreachable highs. Having all of this set during the Christmas season does nothing but highlight the opera beneath the pulp. As mistrust, pain, and disgrace further bind these three souls together, it all culminates in the possibility that what they desire will ultimately leave them even more alone than they already were. During a period of the year where unity and family are embraced at its peak, only their opposites are felt as the film climaxes with a battle of self-destruction that only leaves the three searching for something that can never be found. Fully aware that they are who they are, and can only tread onwards until the nearest thing to closure is felt. Batman Returns is an ode to the lives who are at their most broken during quote-unquote “the most wonderful time of the year”, under the faint guise of a grand-scale Gothic opera. It also happens to be a hodgepodge of utter insanity; chockfull of relentlessly Burtonesque imagery and shockingly blunt innuendo between a penguin man and leather-clad cat lady. It’s a beautiful thing to witness. And to imagine, this was the big Summer blockbuster of 1992. This will absolutely never happen again. So embrace it, strap on that leather, and chug that milk carton. Hell is here.

What a hidden gem! I had such a lovely time at a recent showing of Godzilla (1954). This theater is a bit timeworn, yet undeniably quaint and charming with an unconventional feel. And interestingly enough, the audience served as the sweet element of surprise. Those in attendance created an atmosphere of delight, comfort, and personal acceptance… and get this.. there was an actual host who presented a brief preface to the film just prior to viewing. Very collegiate, which I loved!  All in all pe… END_OF_DOCUMENT_TOKEN_TO_BE_REPLACED