An Official Selection at the 2019 Sundance Film Festival, The Last Tree is the semi-autobiographical story of Femi (as a child played by newcomer Tai Golding), a British boy of Nigerian heritage who, after being fostered in rural Lincolnshire, moves to inner-city London to live with his birth mother. 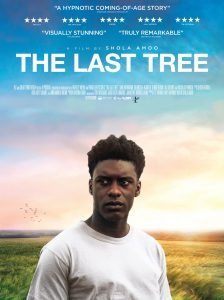 In his teens, Femi (Sam Adewunmi) is struggling with the culture and values of his new environment. Femi must decide which path to adulthood he wants to take, and what it means to be a young black man in London during the early 00s.

Link to purchase tickets to stream this film in our Virtual Cinema will be available from Friday, June 26th (Thursday at Midnight) until Thursday, July 9th. To purchase and stream, click the ‘Stream Now’ button!

A portion of every ticket purchased goes directly towards supporting Orange County’s only nonprofit Art-house theater. Tickets for The Last Tree are $10!

I love the Frida, as an avid movie watcher, it’s great to have a place to go where many classic, cult and underrated films are shown. I had the pleasure of attending “The Decline of Western Civilization” screening with director Penelope Spheres doing a Q&A. Her films are so historically important and impacted me at a very young age. I am forever grateful for the experience, like nowhere else would this be possible. I think it’s truly amazing what the staff and everyone involved is doing for the … END_OF_DOCUMENT_TOKEN_TO_BE_REPLACED

What a hidden gem! I had such a lovely time at a recent showing of Godzilla (1954). This theater is a bit timeworn, yet undeniably quaint and charming with an unconventional feel. And interestingly enough, the audience served as the sweet element of surprise. Those in attendance created an atmosphere of delight, comfort, and personal acceptance… and get this.. there was an actual host who presented a brief preface to the film just prior to viewing. Very collegiate, which I loved!  All in all pe… END_OF_DOCUMENT_TOKEN_TO_BE_REPLACED

LOVE this theater..OMG. I’ve been here several times now for different events. I’ve attended 2 of the 3 Scott Pilgrim events thrown by Cinemattack. I was even the lucky winner of the Scott Pilgrim album on vinyl. I don’t have a record player..but may as well be a trophy for me because I never win anything! lol. I also attended “The Last Unicorn” event with Peter S Beagle- the author speaking and answering a Q and A afterwards. This was so awesome. I have always loved loved this movie and it was … END_OF_DOCUMENT_TOKEN_TO_BE_REPLACED