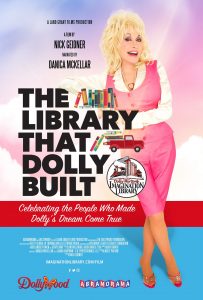 The Library That Dolly Built

The Library That Dolly Built, directed and produced by journalism professor and director of Land Grant Films Nick Geidner, and narrated by Danica McKellar, goes behind the scenes of Dolly Parton’s Imagination Library, to show how one of the most famous and beloved performers in the world has partnered with thousands of local community organizations to develop an efficient and effective program for spreading the love of reading.

Imagination Library started as a gift for the children in Dolly’s hometown, Sevierville, Tennessee, and is now active in all 50 states, and 5 countries, gifting 1.7 million free, age-appropriate books to children every month. The film also provides a glimpse of the profound impact the Imagination Library has on the people through original interviews with authors, policymakers, Imagination Library staff, recipients, and the legend herself, Dolly Parton. Woven throughout the film is a biographical sketch of Dolly Parton, featuring rare photos and films from her childhood.

Unlike most biographies of Dolly, it doesn’t focus on her music. Instead, it demonstrates that at every point in her career, any time she has had success, Dolly Parton has come back to Sevierville to give back to her people.

What a hidden gem! I had such a lovely time at a recent showing of Godzilla (1954). This theater is a bit timeworn, yet undeniably quaint and charming with an unconventional feel. And interestingly enough, the audience served as the sweet element of surprise. Those in attendance created an atmosphere of delight, comfort, and personal acceptance… and get this.. there was an actual host who presented a brief preface to the film just prior to viewing. Very collegiate, which I loved!  All in all pe… END_OF_DOCUMENT_TOKEN_TO_BE_REPLACED