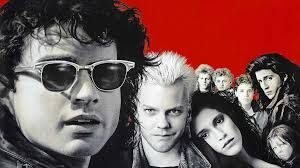 With the recent passing of Joel Schumacher, it seemed only fitting to go back to one of his most iconic films. Being firmly Gen Z, I knew nothing of The Lost Boys or really any of Schumacher’s work. All I knew was that he directed the two “terrible” Batman movies, so I was ready to see what all the hype was about. I was certainly not disappointed.

If there is one word I would use to define The Lost Boys, it would be magical. Everything in this film works together to create a veritable fantasyland for angsty 80s teenagers.

For those unfamiliar with the plot, it follows two brothers, Sam and Michael, who have just moved to California. Michael meets a pretty girl, Star, and is pulled into the leather-clad biker bro gang which Star is a part of. Eventually, it comes out that everyone in this group is a vampire, and they manage to convert Michael as well.

Meanwhile, Sam catches wind of his brother’s new bloodsucking behaviors and is frightened. He teams up with a couple of Vampire Hunting kids to try to take down the head vampire in order to free his brother.

The premise itself is highly original, but the execution doubles down on the spectacle. The vampires are masterfully crafted, with long hair and piercings that just ooze 80s sex appeal and coolness. I imagine it was easy for most of this film’s initial Gen X audience to understand why Michael joined this group, and the makeup on the vampires, once they are revealed in their full glory, is genuinely scary.

However, the beauty goes deeper than the costuming. The lighting and sets create an unknown yet inviting atmosphere. One where the world isn’t so grating. The colored lights interspersed without the film give it an almost euphoric vibe like the characters are living in a dream world. All of the sets add to this euphoria by being grand and mystical.

Overall, while The Lost Boys isn’t exactly my cup of tea, the appeal is undeniable. It gave the young people of its time an outlet of sorts. A place where they can see angsty teens like themselves living a life they can only dream of. It’s almost like a The Perks of Being a Wallflower or The Spectacular Now of Gen X. A coming of age story for the big hair generation.

What this all comes back to is Joel Schumacher’s brilliance. He was able to create inviting fantastical worlds that spoke to people deeply. Many directors struggle for their entire careers to create something like The Lost Boys. Even when Schumacher made bad films, such as the Batman movies, he still injected a definite charm and memorability into them. Joel Schumacher was a gift to the industry and his legacy will live on for decades. Rest in Peace.

I love the Frida, as an avid movie watcher, it’s great to have a place to go where many classic, cult and underrated films are shown. I had the pleasure of attending “The Decline of Western Civilization” screening with director Penelope Spheres doing a Q&A. Her films are so historically important and impacted me at a very young age. I am forever grateful for the experience, like nowhere else would this be possible. I think it’s truly amazing what the staff and everyone involved is doing for the community. They bring the magic of the silver screen without charging you an arm & a leg to attend their special events/screenings. I highly encourage any film lover to check out the Frida, no matter what film you choose, you will not be disappointed! They have an awesome online presence as well (IG, Website) where you can ask any them any questions or view their monthly calendar. They also host local art shows, film festivals showcasing new artists and film-makers. … END_OF_DOCUMENT_TOKEN_TO_BE_REPLACED