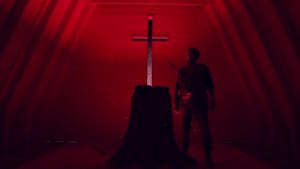 February, 2018: I’m sitting in the freshly-fallen snow of Midway, Utah at a yearly art house conference scrolling through Film Twitter. Sundance is happening less than 20 miles from where I am, and I’m curious to see the reactions to the new films that debuted the day prior. The previous year, sitting in the same spot, I read about how horrific Ari Aster’s debut Hereditary was. That film ended up getting picked up by A24 and going into wide, big-box release—not something that that we’d typically play in our theater.

Helping out with programming at The Frida Cinema means always having to have my eyes on what new and exciting genre films are going to be hitting the circuit later in the year. The goal is to catch a “cult classic” in its prime. I know this doesn’t make a lot of sense, seeing as cult classics, by definition, are films that don’t do well on their initial release and then later, with time, find their audience. In the 2000s, these kinds of films have been rare. Edgar Wright’s Scott Pilgrim vs the World and John Cameron Mitchell’s Hedwig and the Angry Inch spring to mind, but overall… not a ton.

Then I saw it. A review hit my timeline for the new Nicolas Cage movie Mandy. When was the last time a Nicolas Cage movie played Sundance? I was, of course, immediately intrigued. Then I saw the name Panos Cosmatos was attached to it and I remembered that he had directed what some people could consider a cult classic (Beyond the Black Rainbow) in the 2000s. The reviewer immediately dubbed it it the “cult movie not to miss this year.” That’s all I needed to know. Well… that and the fact that the plot revolved around Nic Cage taking revenge on an LSD biker gang that killed his wife.

On Cultivating a Cult Classic

I was only helping with programming at the time, so our full-time programmer (and Executive Director) Logan Crow can attest that at least two to three times a month, I asked him how we were looking on Mandy. “No word yet” was the response for many months, as Mandy was searching for the right distributor. RLJ Films—a relatively new distribution company to my knowing, finally picked up the film, giving The Frida a real shot at landing it. We did. And the rest, as we know it, is history.

Thanks to RLJ Films’ confidence in us, we were the first theater within many, many miles to play Mandy. On opening night, Nic Cage fans from all walks of life descended upon our little theater in Santa Ana to give it a shot. Even hundreds of people from Los Angeles drove here to see it. If you know film fans from LA, they rarely have to leave their city to see anything good, so this was especially satisfying to see them not only showing up, but complimenting the theater. We even had critics showing up and mentioning us in their reviews! The theater was totally packed for two weeks straight. When the lights finally went down, and King Crimson’s song “Starless” boomed over the opening credits, I knew the film would be something special.

Mandy ended up being our the most successful film we’ve ever played here by threefold, totally fulfilling its promise to be the biggest cult hit of the year. It’s rare that a movie with that much hype pays off so well both commercially and critically. It’s a movie about Nic Cage killing bad people with a stylish axe while an amazing score by the late, great Jóhann Jóhannson plays in the background. It should work. It does work. It did work.

The screenwriter of the film, Aaron Stewart-Ahn, reached out to me directly on Twitter and essentially asked “What the hell is going on over there? The numbers are off the charts. We’re doing well in certain areas, but nothing like Orange County!” I didn’t have a great answer for him, other than knowing that fans of genre film are always looking for that next communal thrill to share with each other. If he didn’t already know, I let him know that the film he wrote was just that: a cult classic. I also told him we’ll drop the “cult” around here and just refer to it as a “classic.” The film he wrote really boosted our theater to the next level, from what I could tell.

We are screening Panos Cosmatos’ Mandy this weekend in honor of the one-year anniversary of its debut at The Frida Cinema. If you saw it, come back and see it again—it’s still a lot of fun! If you haven’t seen it, don’t wait another year to get a glance of it on the big screen. Trust me on this one.

LOVE this theater..OMG. I’ve been here several times now for different events. I’ve attended 2 of the 3 Scott Pilgrim events thrown by Cinemattack. I was even the lucky winner of the Scott Pilgrim album on vinyl. I don’t have a record player..but may as well be a trophy for me because I never win anything! lol. I also attended “The Last Unicorn” event with Peter S Beagle- the author speaking and answering a Q and A afterwards. This was so awesome. I have always loved loved this movie and it was … END_OF_DOCUMENT_TOKEN_TO_BE_REPLACED