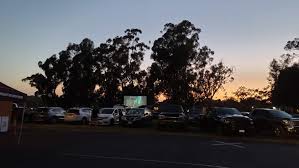 The sight of cars lined up at a dead stop anywhere except a parking lot would normally be a cause for concern here in Orange County. This past Memorial Day weekend saw this occurrence, not due to alien invasion or some sort of night-time parade, but by the return of a vintage tradition when we need it most: the Drive-In movie.

A flash to the past for some and an all-new frontier for others, hundreds of people spent their Memorial Day weekend perched atop the gorgeous hill of The Muckenthaler Cultural Center, lounging in cars of all makes and models for a screening of Rob Reiner’s 1987 hit The Princess Bride with The Frida Cinema. With not one, but three sold-out screenings at a capacity of 110 cars each, the reception was instant, and bigger than anyone could’ve hoped– one might even describe it as inconceivable! The crowd even included news coverage from KCAL9 and the OC Register hoping to catch a glimpse.

By the space’s opening at 6:30pm on Sunday the 24th, nearly a dozen cars were queued on the crux of Fullerton’s Rose and Buena Vista Drive, with more folks filing in until just before the show’s start at 8:15pm. Thanks to the hard-working crew of Frida volunteers (the unstoppable Leonardo and Alex) and staff (pros Martin, Trevor, Jordan, and Logan), by day two the process was smooth and the parking even smoother. Though day one saw a few challenges with bathroom waits and the expectation of food, like any new endeavor, there are always a couple kinks to work out here and there.

Quite honestly, it seemed as though this was a regular event with how seamlessly the night ran. While The Frida Cinema is no stranger to outdoor screenings from rooftops to cemeteries, the unique challenges we all must face this summer includes finding fun that’s both enriching and responsible, with safety at the forefront more than ever before. The itch to connect through cinema and socializing in person has reached a fever-pitch for many of us that streaming in the home just can’t quell. It’s the very same community element that is currently restricted that is essential to The Frida’s mission to bring people from all walks of life together, and what’s allowed us to thrive over the years.

Thankfully, it’s clear there are some folks in OC that are eager to embrace the new normal to bring us together again and made this weekend such a success. Though masks were and will be required when exiting the car for any reason, there was an undeniable air of fellowship between neighbors for the evening. Families and friend groups of all ages could be seen with a quick glance around, little ones pushed up against the windows, bare feet perched upon the dashboard, and even furry friends.

Folks even showed solidarity through their protective wear, with the debut of The Frida’s very own custom masks, still available for a $10 donation on our site. At the projector’s first flash, there was a roar of car horns in place of cheers, and by the end the flickering of headlights served as applause. When the radio channel wasn’t playing 80s hits or film audio, the voices and music from others could still be heard from cracked windows and truck beds. During the film, some laughter from a group in a convertible could be heard at a witty line from Weastley, or the mannerisms of Fezzik and Inigo Montoya.

The Princess Bride’s reach and timelessness could truly be felt as the source of comfort and excitement, right there backlit by the sunset. There couldn’t be a more fitting cherished classic to be the premier of what will be many more Drive-In experiences to come, with adventure and charm just around the corner.

What a hidden gem! I had such a lovely time at a recent showing of Godzilla (1954). This theater is a bit timeworn, yet undeniably quaint and charming with an unconventional feel. And interestingly enough, the audience served as the sweet element of surprise. Those in attendance created an atmosphere of delight, comfort, and personal acceptance… and get this.. there was an actual host who presented a brief preface to the film just prior to viewing. Very collegiate, which I loved!  All in all pe… END_OF_DOCUMENT_TOKEN_TO_BE_REPLACED