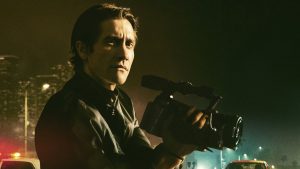 I like to say that if you’re seeing me you’re having the worst day of your life.

The following blog is written by former Frida superstar volunteer Sam Feldstein. Sam has relocated to Iowa City, Iowa, but intends to write guest blogs from time to time:

Lou Bloom is looking for a job. He’s made up his mind to find a career he can learn and grow into. Who is Lou? He is a hard-worker, he sets high goals and he’s been told he’s persistent. But he’s not fooling himself. Having been raised with the self-esteem movement so popular in schools, he’s used to expecting his needs to be considered. But he knows that today’s work culture no longer caters to the job loyalty that could be promised to earlier generations. What he believes is that good things come to those who work their asses off, and that people such as yourself who reach the top of the mountain didn’t just fall there. His motto is if you want to win the lottery you have to make the money to buy a ticket. Did he say he worked in a garage? So how about it? He can start tomorrow or even why not tonight?

This rapid-fire description/sales-pitch of/by Jake Gyllenhaal’s Lou Bloom ripped almost verbatim from the Nightcrawler screenplay reflects precisely the values imparted on we American children. We were told to value hard work. We were told to have faith that said hard work would be enough to get us what we want. We were told that what we want is success. We were told that success means money, and money means power, and power means control; over our circumstances, over our future, over our surroundings, over other people. We were told that that is the dream, to conquer limitation. And we were told if someone finds themselves in dire straits it is because they didn’t work hard, they didn’thave faith, they didn’t want it enough, the guy begging for change on the sidewalk is there bychoice or he wouldn’t be there at all he’d have a job, be saving up, be making something of himself and it’s not really my problem is it he got sick maybe or got in a car accident and now he’s drowning in thousands of dollars of hospital bills, three grand just for the ambulance, fighting with his own insurance company just to get them to do their job. Sorry that happened but that doesn’t change the fact he still chose to be out there, begging on the sidewalk. American culture erases empathy from the success equation by making the individual responsible not only for their actions but for their circumstances.

Now what makes Nightcrawler fairy tale of sorts is that Lou Bloom, unlike so many real-life success stories, really does pull himself up by his bootstraps, goes from selling stolen scrap metal to building his own company, Video Production News, so despite our revulsion we can’t help but find something to admire in the man, his work ethic and his drive to overcome his situation with almost superhuman focus and endurance. Then again there is something superhuman about Lou, isn’t there, or at least something adjacent to preternatural, something that makes him unstoppable, almost machine-like in his intractability, so that he becomes less a character and more a breathing semantic statue, the quintessential if iconoclastic exemplar of American individualism, incarnate ambition stretched taught over ruthless mechanisms combusting promises to power arms made only to climb, encasing a hollow core of immaculate egoism.
Lou’s power is this:

Here Lou admits to his hatred for people, and his greatest strength is revealed. His misanthropy is his Darwinian advantage. He does not account for the consequences of his actions as they pertain to others. In Lou Bloom-world, other people don’t matter. And there is a dangerously alluring freedom in that. Wouldn’t you love to just…not care? Wouldn’t you love to be able to put yourself first with zero concern for the ramifications? You find that abhorrent, good, that’s because you do care. But if you didn’t, you wouldn’t. Imagine being Lou, so consumed by your solipsistic nihilism that you act out of not belief but knowledge,certainty of your righteousness. Is there not something appealing about the notion? Something freeing?
But as we know, that freedom comes at a price. What Nightcrawler wants us to understand is that the price of ambition is not paid by the ambitious, but the people they exploit, injure, even kill, along the way.

What I’m realizing, particularly as I grow older (I’m in my mid-twenties) and especially in light of the last four years and the upcoming election, is that the world is filled with Lou Blooms. Not sociopaths per se, but people who seem practiced at removing empathy from the equation. And when these people act in their own interests, and the rest of us pay for it, it means that we have to overcompensate with our own generosity in what typically feels like a vain attempt to make up lost ground. Part of what’s made growing up in the last twenty years and continues to make existence in the 21st century so infuriating is that we can see another, better world right in front of us. A world without disparity, with free accessible healthcare, and ubiquitous job security, and electric vehicles, and clean energy, and affordable education, and so on. We have the technology. We have the awareness. We have the desire. It’s all there, in the eye of our hopeful imaginations, a quintessent future, tantalizing not so much in its possibility as its plausibility. We could have all of it.
If only it weren’t for Lou Bloom, the perfect American.

What a hidden gem! I had such a lovely time at a recent showing of Godzilla (1954). This theater is a bit timeworn, yet undeniably quaint and charming with an unconventional feel. And interestingly enough, the audience served as the sweet element of surprise. Those in attendance created an atmosphere of delight, comfort, and personal acceptance… and get this.. there was an actual host who presented a brief preface to the film just prior to viewing. Very collegiate, which I loved!  All in all pe… END_OF_DOCUMENT_TOKEN_TO_BE_REPLACED