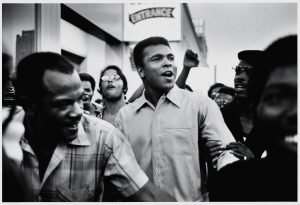 No conventional sports documentary, The Trials Of Muhammad Ali investigates its extraordinary and often complex subject’s life outside the boxing ring. From joining the controversial Nation of Islam and changing his name from Cassius Clay to Muhammad Ali, to his refusal to serve in the Vietnam War in the name of protesting racial inequality, to his global humanitarian work, Muhammad Ali remains an inspiring and controversial figure. Outspoken and passionate in his beliefs, Ali found himself in the center of America’s controversies over race, religion, and war. From Kartemquin Films – makers of such acclaimed documentaries as Hoop Dreams and The Interrupters – and Academy Award-nominated director Bill Siegel (The Weather Underground), The Trials Of Muhammad Ali examines how one of the most celebrated sports champions of the 20th century risked his fame and fortune to follow his faith and conscience.

I love the Frida, as an avid movie watcher, it’s great to have a place to go where many classic, cult and underrated films are shown. I had the pleasure of attending “The Decline of Western Civilization” screening with director Penelope Spheres doing a Q&A. Her films are so historically important and impacted me at a very young age. I am forever grateful for the experience, like nowhere else would this be possible. I think it’s truly amazing what the staff and everyone involved is doing for the … END_OF_DOCUMENT_TOKEN_TO_BE_REPLACED