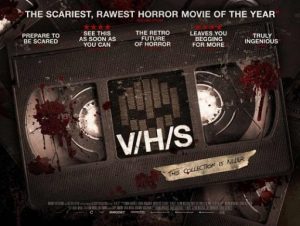 Horror has always been deeply entwined with the human experience. Ever since humanity became more civilized, we have been seeking to recapture that rush of danger our primitive ancestors dealt with on a regular basis. Because of this, Horror has been a staple of popular culture, never far behind any new form of media that is developed, books, radio, magazines, the internet, and cinema all have examples of horror from early in their lifespan. Humans are always collectively trying to find new ways to recapture those ancient instincts in increasingly elaborate ways.

The Horror genre is almost as old as cinema itself. With Georges Méliès 1896 short film Le Manoir du Diable being considered one of the first. The genre only expanded from there, with 1920s German expressionist films like The Cabinet of Dr. Caligari, Nosferatu, and Waxworks setting the earliest standard for creating genuinely scary films. This was of course followed by the Universal Monster movies, Hitchcock, John Carpenter, and the Saw franchise all shaping and guiding horror to where it is today.

Cannibal Holocaust was revolutionary. Its story was fairly basic, following a group of documentarians as they journey into a South American rainforest, before getting brutally killed by the natives. However, it’s production was groundbreaking. Never before had horror looked so amateur and realistic. It was so realistic that a whole legal case ensued to verify that it wasn’t just an elaborate snuff film. Deodato had changed the game. Holocaust featured many of the tropes that would become commonplace within the genre; shaky camera operation, amateurish acting, elaborate practical effects, and very little nondiegetic sound. It’s hyper-realistic appearance terrified audiences and left a mark on the Horror genre for decades to come.

Almost twenty years after Cannibal Holocaust premiered, another pivotal found footage film hit the scene. The Blair Witch Project, directed by Daniel Myrick and Eduardo Sanchez, became an instant cultural phenomenon, becoming just as influential as Holocaust before it, if not more so. This film similarly follows a trio of documentarians as they explore the authenticity of the supposed Blair Witch. While this film wasn’t new, it’s elaborate marketing skyrocketed it into a cultural phenomenon, bringing the previously niche found footage genre to the mainstream.

With all this context, it now becomes easier to see what the horror landscape was like when V/H/S was released in 2012. It was conceived as a place for a group of indie directors to come to make scary found-footage shorts on a microbudget. For the most part, they were successful. Anthology films often struggle to overcome their lack of cohesive story, but V/H/S uses the format quite well.

V/H/S features five stories held together by the narrative frame of a group of burglars finding a batch of V.H.S tapes. The stories on the tapes include a couple being stalked on their honeymoon, a one-night-stand went wrong, a video chat that involves aliens, a weird forest glitch segment that doesn’t make much sense, and a typical haunted house.

While some segments can feel repetitive, including two that take place primarily in hotels, the film as a whole feels rich and whole. Every story, excluding the forest one, sets up a premise, introduces terror, and subverts expectations in twenty minutes or less. It is an exercise in how to make low-budget horror.

With a modest reception at Sundance and a limited theatrical run alongside wider DVD release, V/H/S was successful. Production on a sequel started immediately. With directors like The Raid’s Gareth Evans and Myrick & Sanchez from the original Blair Witch Project lining up for the sequel, this franchise seemed solid.

The sequel is arguably better than its predecessor. Featuring a plethora of decently high-budget concepts executed masterfully. They include a zombie attack from the perspective of the zombie, an alien abduction film with a dog-mounted camera, a weird cyborg-eye that sees ghosts, and a documentary of an Indonesian cult that goes wrong. If the first film was an exercise in low-budget horror, this film adds a high-concept caveat to the mix.

The success of the sequel inspired the third film, 2014’s V/H/S: Viral. This is the weakest of the three and singlehandedly killed the franchise. The segments include a magician with an evil coat which feels very Doctor Strange, a man who opens a portal to another dimension that is the set-up to an immature penis joke, and a group of skaters who become involved with cultists and summon a demon.

The problem with these segments is their lack of adherence to their low-budget roots. Instead of having a single camera held by a character, these shorts tend to zip from camera angle to camera angle with the excuse of ‘news crews’ adding the only explanation. There is also heavy use of computer-generated effects that give the whole movie a low-quality feeling. Whereas the other two films made horror around a small budget, this one seems like they intended to have a larger budget but lost funding. Making it feel like any other B-rate shovel film that people rent at Redbox because they like the artwork. It is unfortunate to see such a quality franchise go out on such a sour note.

As the horror genre continues to change and become scarier, films like V/H/S and its equal represent a niche time period where found footage reigned supreme. Immersion may become more thorough, but found footage will always captivate a certain audience who are drawn to the voyeuristic terrors. While the genre has stagnated in recent years, I will personally be eagerly awaiting whatever horror comes next.

Watch V/H/S for free on Tubi.

What a hidden gem! I had such a lovely time at a recent showing of Godzilla (1954). This theater is a bit timeworn, yet undeniably quaint and charming with an unconventional feel. And interestingly enough, the audience served as the sweet element of surprise. Those in attendance created an atmosphere of delight, comfort, and personal acceptance… and get this.. there was an actual host who presented a brief preface to the film just prior to viewing. Very collegiate, which I loved!  All in all pe… END_OF_DOCUMENT_TOKEN_TO_BE_REPLACED