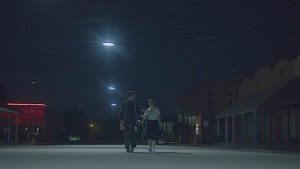 Science Fiction movies tend to be grandiose and filled with expensive special effects in an attempt to bring their fantastical stories to life. Yet, Andrew Patterson was able to create a Sci Fi experience on a budget of less than $1 million. His cinematic debut, The Vast of Night, follows a young radio host and switchboard operator in a 1950s New Mexico small town as they hear strange noises through the radio and try to find out if they are of an extraterrestrial origin.

Patterson directed, wrote, produced, edited and financed the film. Even though it was his debut as a filmmaker, Patterson demonstrated confidence that many Hollywood filmmakers should be jealous of. The most noteworthy example of his talent came with a long take in the middle of the film. The camera starts from a switchboard and flows through the small town without a cut. The camera moves through a basketball game before going out a window and then continuing to the radio station.

Patterson sets the film in the 1950s to reference the films that inspired him: Them!, The Blob, and Invasions of the Body Snatchers. Viewers watching the film will notice similarities to other science-fiction media from outside the ‘50s. For instance, the opening shot of the film includes a narrator’s monologue that is quite reminiscent of a 1960s television show The Twilight Zone. Like Steven Spielberg’s 1970s classic Close Encounters of the Third Kind, The Vast of Night’s portrayal of an encounter with extraterrestrial beings is both dreadful and awe-inspiring.

Jake Horowitz, who played the radio host, is theater-trained; and Sierra McCormick, the switchboard operator, had experience in television before this role. Their experience came through in their performances as they blended into their roles as 1950s teenagers. If not for their convincing performances, Patterson’s unconventional film may have come across as amateurish.

Despite Patterson’s talent, the film was still limited by its small budget. It starts off slow as its main plot does not begin until about 20 minutes in. The early portion of the movie introduces the two lead characters at a basketball game the whole town is attending. The sequence felt like a slightly bloated to get the film to a 91-minute runtime.

Some viewers may leave feeling unsatisfied or left in the dark because the movie does not reveal much about its paranormal elements. Yet, I think it is better left to viewers’ imaginations, especially for such a low-budget picture.

Another way the film’s budget limited the story was through the heavy use of exposition in the form of side characters’ backstories. While exposition can often feel lazy, it does not drag down this film. The backstories being told are interesting enough to keep the audience engaged and creepy enough to add to the film’s atmosphere.

What also made this exposition engaging for viewers was the actors telling it. Bruce Davis plays a caller to the radio station who had heard the noises before. Even though he is never seen in the film, his voice alone sells the creepiness of his story.

Gail Cronauer, an actress with decades of acting experience, portrays the other character that shares their backstory. Her performance exudes dread as she tells her story, adding to the film’s atmosphere and tension. Patterson emphasizes her strong performance by using a close-up shot in one long take throughout her monologue.

The Vast of Night may not satisfy everyone, but it should not be debatable that Patterson demonstrated immense talent in his debut. It is hard not to get excited to see what he does next. His passion for Science Fiction and his talent, mixed with a larger budget on his next project, could lead to exemplary results next time around.

The Vast of Night is now streaming on Prime Video.

I love the Frida, as an avid movie watcher, it’s great to have a place to go where many classic, cult and underrated films are shown. I had the pleasure of attending “The Decline of Western Civilization” screening with director Penelope Spheres doing a Q&A. Her films are so historically important and impacted me at a very young age. I am forever grateful for the experience, like nowhere else would this be possible. I think it’s truly amazing what the staff and everyone involved is doing for the community. They bring the magic of the silver screen without charging you an arm & a leg to attend their special events/screenings. I highly encourage any film lover to check out the Frida, no matter what film you choose, you will not be disappointed! They have an awesome online presence as well (IG, Website) where you can ask any them any questions or view their monthly calendar. They also host local art shows, film festivals showcasing new artists and film-makers. … END_OF_DOCUMENT_TOKEN_TO_BE_REPLACED