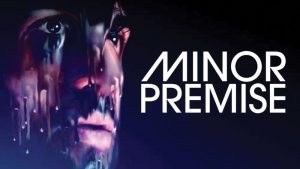 Now Streaming at The Frida Cinema

As a darkly, suspenseful science fiction film, director/co-writer Eric Schultz’s Minor Premise presents an underlying dialogue on the larger topic of mental health and the “true self.” I was bound to the screen. If this were a book, it’d be a page turner. The unpredictability of the film parallels the uncharted territories of the human brain.

Dr. Ethan Kochar (Sathya Sridharan) battles his emotions surrounding his brilliant father’s recent passing by throwing himself into his work. He uses himself as a guinea pig, pushing away his former lover turned lab partner, Alli (Paton Ashbrook), in the process. His work exacerbates his already questionable mental state when he manages to isolate nine sections of his consciousness, each of which takes turns interacting with Alli, whose role evolves from girlfriend to lab partner as she aims to set boundaries with an increasingly unhinged Ethan.

Despite a slow start, Justin Derry’s creative cinematography (including a wormhole view!) and stylishly visual montages kept me glued, as did composer Gavin Brivik’s pensive, foreboding score, which mirrors Dr. Kochar’s psychological descent. The character is a very relatable person, dealing with death, overwhelm and guilt by attempting to avoid it or drown it. His devolution is a heartbreaking and realistic portrait of someone suffering a mental health disorder. I felt invested in the film, and dedicated to Kochar’s self-inflicted emotional whirlwind, because I could relate to most of the “sections” of his consciousness. The use of close-up camera angles make Kochar’s breakdown all the more intimately relatable.

Minor Premise was thought provoking and disturbingly captivating. Although most of the technical jargon may be lost on some audiences, the film is at its heart a character study. Rich and invested performances allow for empathy and understanding of the characters. Sridharan switches between the nine sections of his consciousness with awesome energy, matched by co-star Ashbrook. His role was demanding, and he does not disappoint.To top it all off, the soundtrack boasts some eclectic jams that have already become part of my own life’s soundtrack. Minor Premise is worth a watch, and is now streaming at The Frida Cinema.

I love the Frida, as an avid movie watcher, it’s great to have a place to go where many classic, cult and underrated films are shown. I had the pleasure of attending “The Decline of Western Civilization” screening with director Penelope Spheres doing a Q&A. Her films are so historically important and impacted me at a very young age. I am forever grateful for the experience, like nowhere else would this be possible. I think it’s truly amazing what the staff and everyone involved is doing for the community. They bring the magic of the silver screen without charging you an arm & a leg to attend their special events/screenings. I highly encourage any film lover to check out the Frida, no matter what film you choose, you will not be disappointed! They have an awesome online presence as well (IG, Website) where you can ask any them any questions or view their monthly calendar. They also host local art shows, film festivals showcasing new artists and film-makers. … END_OF_DOCUMENT_TOKEN_TO_BE_REPLACED