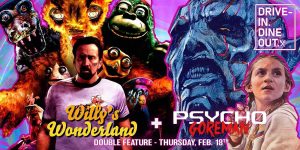 Join us on Thursday, February 18th at 7:00pm at Tustin’s Mess Hall Market for a horror-comedy double feature of Willy’s Wonderland + Psycho Goreman!

A quiet loner (Nic Cage) finds himself stranded in a remote town when his car breaks down. Unable to pay for the repairs he needs, he agrees to spend the night cleaning Willy’s Wonderland, an abandoned family fun center. But this wonderland has a dark secret that the “The Janitor” is about to discover. He soon finds himself trapped inside Willy’s and locked in an epic battle with the possessed animatronic mascots that roam the halls. To survive, he must fight his way through each of them.

Siblings Mimi and Luke unwittingly resurrect an ancient alien overlord who was entombed on Earth millions of years ago after a failed attempt to destroy the universe. They nickname the evil creature Psycho Goreman (or PG for short) and use the magical amulet they discovered to force him to obey their childish whims. It isn’t long before PG’s reappearance draws the attention of intergalactic friends and foes from across the cosmos and a rogues’ gallery of alien combatants converges in small-town suburbia to battle for the fate of the galaxy.

I love the Frida, as an avid movie watcher, it’s great to have a place to go where many classic, cult and underrated films are shown. I had the pleasure of attending “The Decline of Western Civilization” screening with director Penelope Spheres doing a Q&A. Her films are so historically important and impacted me at a very young age. I am forever grateful for the experience, like nowhere else would this be possible. I think it’s truly amazing what the staff and everyone involved is doing for the … END_OF_DOCUMENT_TOKEN_TO_BE_REPLACED

LOVE this theater..OMG. I’ve been here several times now for different events. I’ve attended 2 of the 3 Scott Pilgrim events thrown by Cinemattack. I was even the lucky winner of the Scott Pilgrim album on vinyl. I don’t have a record player..but may as well be a trophy for me because I never win anything! lol. I also attended “The Last Unicorn” event with Peter S Beagle- the author speaking and answering a Q and A afterwards. This was so awesome. I have always loved loved this movie and it was … END_OF_DOCUMENT_TOKEN_TO_BE_REPLACED