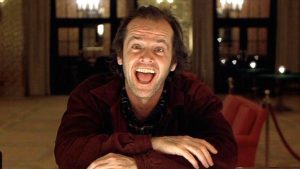 Oh dads. You gotta love ‘em. They’re there for us by giving advice on life’s obstacles, putting bandages on our boo-boos, and sometimes being really annoying—like forcing us to go on road trips, be assassins, or join their shadowy organization.

Shut up, you’re not my real dad! Actually he kind of is, for all the love, care, and guidance these types of characters provide. My personal favorite is Alfred of the Batman franchise (it was too tough to choose between Obi-Wan Kenobi and Yoda, and Dumbledore puts Harry in all kinds of danger). After his parents are brutally murdered, Alfred steps in to care for the young master Wayne, as well as mentor and assist him with his deeds as the Dark Knight of Gotham City.

Countless mafiosos have graced cinema screens since the Golden Age of Hollywood, but arguable none are more infamous than Marlon Brando’s portrayal of Don Vito Corleone in Francis Ford Coppola’s The Godfather. Corleone was a man who truly loved his family—sure, he may have guilted his son into taking over the violent family business, but at least he was a doting father and family man, unlike how Michael would turn out to be.

Uh oh, these daddies have sure got a screw loose! They don’t quite fit into the evil category, but they are certainly ill-advised in their child rearing methods. Favor goes to Nicolas Cage as the disturbed Big Daddy/Damon Macready in Kickass, a performance that combines the best of both Nics—manic and unsettlingly calm.

Terry O’Quinn in The Stepfather (1987) is a close second, but my favorite horror movie dad has got to be Jack Torrance from Stanley Kubrick’s The Shining. Anchoring one of the best horror films that also puts the fatherhood aspect front and center, this horrifying father is one for the books! (Literally, he plays a writer in a film based on a Stephen King novel).

Gracing both the silver and color screens, of course Goofy is the biggest goof of all cinema dads. Wholesome, loving, and one of the best on-screen representations of single fatherhood, A Goofy Movie is one of my all-time favorite Disney and father-son movies.

When I first saw Robin Williams’ portrayal in this bittersweet film addressing teen suicide and the trials of fatherhood, it broke my heart. The film is now even more poignant on all kinds of levels since its star’s untimely death. Written and directed by Bobcat Goldthwait, World’s Greatest Dad is one of Williams’ more underrated films and contains one of my favorite performances from this colorful comedian’s filmography. (Plus, in Mrs. Doubtfire he was technically stalking his family, sooo . . .)

There are, luckily, so many examples of all-around good dads in cinema who just want to make their families happy. The father from Life Is Beautiful, for example, is so endearing, but when I think of a true family man, I default to Clark Griswold of National Lampoon’s Vacation movies. After the success of the original where Clark attempts to get his family across the country to “America’s Favorite Family Fun Park”, Wally World, the character and his family became so beloved that the movie sparked 6 sequels, all equally charming and good family friendly fun.

8. “Gone But Not Forgotten Dads” — Mufasa, The Lion King

The category may be a tearjerker, but there are a lot of portrayals of dads reaching out from the great beyond in film—either from the spirit world or through memories. Due for a live-action release this July, The Lion King takes home this category, with Mufasa’s death (spoiler alert) prompting a coming-of-age adventure for his son who too would complete the circle of life into fatherhood.  This dad is voiced by James Earl Jones, who appears as a father in film and on this list multiple times.

A movie starring three of the ‘80s most likable Hollywood ‘it guys,’ 3 Men and a Baby chronicles the mishaps of a trio of perpetual bachelors struggling to take care of a baby girl who was left on their doorstep by one of their romantic flings. A movie so chock-full of affable charm, it is like watching 3 Paul Rudds learning how to feed, burp, and dress their new found precious bundle of joy. 3 Men and a Baby, directed by one of my favorite actors of all time, the great Leonard Nimoy (yes, Spock), is the quintessential example of the accidental fatherhood trope.

This category is usually where we can find the cute if not unhealthy father-daughter relationships most of the time. It could be argued that Ariel’s dad of the Little Mermaid was pretty darn overprotective, and Marlin of Finding Nemo wouldn’t even let Nemo go play with his friends unattended at first, but I would say that Jack Byrnes (Robert De Niro) from Meet the Parents is the most overprotective—he does secretly subject her fiance, Greg Focker (Ben Stiller), to a lie detector test in his underground bunker after all, and the former CIA agent is “always watching.”

As far as film history goes, this category is stacked! Not quite horror and not intrinsically disturbed, this category is more for dads like Dr. Evil, Thanos, and Daniel Plainview; however, the most evil dad of them all—though arguably well-meaning since in the end he somewhat redeems himself and at the heart of it all he really just wanted his son to succeed—is of course Star Wars’ very own Darth Vader. Voiced, again, by James Earl Jones (cue sinister-sounding heavy breathing), his famous mic drop line, “No, I am your father,” is one of the most quoted (and misquoted) lines in cinema history.

With dads like John McClane (Die Hard franchise) and John Matrix (Commando) running around, this category has some strong and muscle-y competition. However, the guy who has really been all about his kid in recent years and does it all without wasting time on cheeky one-liners or putting on camo face paint is Liam Neeson in the Taken movies. He has a very particular set of skills, and he uses them in his intense mission of finding his daughter with basically no leads except one ominous phone call. Impressive.

I would argue that the main goal and purpose of all real dads is to impart as much wisdom as possible, while providing moral structure and leadership to their children in order to navigate the world they live in. There are many examples of this in film, but none more important to me than Atticus Finch in To Kill A Mockingbird. In a trial really about the widespread racism that plagues the deep south, Atticus teaches his children that all people are created equal and should be treated as such, while also being supportive of their personal development and sympathetic to their needs.

“Did I ever tell you to eat up? Go to bed? Wash your ears? Do your homework? No. I respected your privacy, and I taught you self-reliance.” Although Henry Jones technically did not abandon Indie, he was estranged from the franchise’s title character. While his tough style of child rearing may just have instilled a sense of independence in his son, he still probably should have hugged the kid every now and then. At least they share a bonding adventure together later in life, in my favorite installment of the franchise, Steven Spielberg’s Indiana Jones and the Last Crusade.

When superheroes first began hitting the screen, they were primarily single—makes sense for their line of work. Recent depictions of superheroes have gotten more complex portrayals, leaning on exploring the human side of their existence, particularly in the Marvel movies with the great Iron Man becoming a father in Avengers: Endgame.They’re pretty great and all, but the best superhero dad is definitely Mr. Incredible in Pixar’s The Incredible movies. Sure, he lets his kids in on the action against dangerous foes, but makes saving the world a family affair does seem to be a great bonding experience for the family of five, who are each endowed with their own special powers.

What a hidden gem! I had such a lovely time at a recent showing of Godzilla (1954). This theater is a bit timeworn, yet undeniably quaint and charming with an unconventional feel. And interestingly enough, the audience served as the sweet element of surprise. Those in attendance created an atmosphere of delight, comfort, and personal acceptance… and get this.. there was an actual host who presented a brief preface to the film just prior to viewing. Very collegiate, which I loved!  All in all pe… END_OF_DOCUMENT_TOKEN_TO_BE_REPLACED