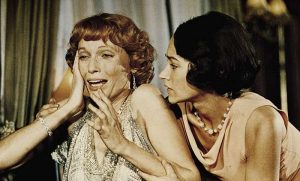 Not many movies can be as fun and engaging as a good murder mystery. Viewers tensely sitting on the edge of their seats while they get their brains going to try to deduce for themselves who the culprit is. And nothing feels better than that moment when all the pieces are put together to find out who the killer is. So as The Frida Cinema gears up to host drive-in screenings of the great murder mysteries Clue and Knives Out, cinephiles should check out these great whodunnits in the meantime.

One of the earliest entries in the whodunnit genre, And Then There Were None follows a group of strangers invited to a dinner party at a mansion on a deserted island. One by one, they are killed off and the survivors try to discover who the killer is before it is too late.

Based on a 1939 novel from famous mystery writer Agatha Christie, the film’s source material comes from the mind of one of the greatest mystery writers ever. The film deals with moral ambiguity as all the strangers invited to the island have themselves committed heinous crimes, so some viewers might find themselves siding with the unknown killer.

Like the great films The Frida is playing, this whodunnit is brought to life by an all-star cast. Albert Finney leads the cast as Poirot, who is set out to solve the film’s central mystery. The rest of the cast is filled up with great actors such as Sean Connery, Lauren Bacall, Ingrid Bergman, Anthony Perkins, and several others.

The actors’ performances and guidance from established film director Sidney Lumet made the film a success. The movie was nominated for six Academy Awards, with Bergman winning best supporting actress. The story’s longevity as a staple in the murder mystery genre led to another adaptation in 2017 with Kenneth Branagh bringing Poirot to life.

This film spoofs the whodunnit genre as its cast of characters is primarily made up of detectives competing to solve the film’s central mystery. Each detective is portrayed similarly to a famous literary detective, including Hercule Poirot from Murder on the Orient Express. Based on a script from playwright Neil Simon, the detectives try to discover who killed a millionaire and his butler in their secluded country home.

The detectives are brought to life by an ensemble of veteran actors: Peter Sellers, David Niven, Maggie Smith, James Coco, Peter Falk and Elsa Lanchester. The murdered millionaire is portrayed by famous author Truman Capote in rare acting performance and his murdered butler is portrayed by Alec Guinness. While not reaching the heights of films it pokes fun at, Murder By Death is a worthwhile ride for whodunnit fans.

Another Agatha Christie adaptation, Death on the Nile lives up to its title when a newlywed woman is found dead on a cruise ship on the Nile River. Serving as a sequel to Murder on the Orient Express, the lead detective on the case is Hercule Poirot.

While Finney did not return to play Poirot, Peter Ustinov easily stepped into the role and would go on to portray Poirot again in 1982’s Evil Under the Sun. Along with Ustinov, an all-star cast was assembled: Maggie Smith, Angela Lansbury, Bette Davis, Mia Farrow, David Niven and George Kennedy.

The film was shot on location in Egypt, so the Great Pyramids, the Sphinx, and temples at Abu Simbel and Karnak can be seen by viewers. So not only do viewers get a great mystery and all-star cast, but they also get to visit and appreciate extraordinary Egyptian landmarks.

From veteran director Robert Altman, Gosford Park tells the story of a dinner party at an English country house where a murder occurs. Like any great whodunnit, the suspects are brought to life by an all-star cast: Charles Dance, Stephen Fry, Richard E. Grant, Helen Mirren, Clive Owen, Ryan Phillipe, Maggie Smith and many more.

Rian Johnson, the director of Knives Out, cited Gosford Park as one of the inspirations for his whodunnit and it shows in both films’ themes. As Knives Out clearly brought up classism in its mystery, Altman’s film did as well. The characters in Gosford Park are either the wealthy patrons attending the dinner party or the servants working at the country house. The film shows both their perspectives as the investigation progresses and how the wealthy rely on their servants.

The film’s themes, all-star cast, and overall mystery led to success as the film was nominated for seven Academy Awards, including best picture, best director, and two best-supporting actress nominations for Smith and Mirren. The film went on to win one Academy Award, best original screenplay for Julian Fellowes’ script.

What a hidden gem! I had such a lovely time at a recent showing of Godzilla (1954). This theater is a bit timeworn, yet undeniably quaint and charming with an unconventional feel. And interestingly enough, the audience served as the sweet element of surprise. Those in attendance created an atmosphere of delight, comfort, and personal acceptance… and get this.. there was an actual host who presented a brief preface to the film just prior to viewing. Very collegiate, which I loved!  All in all pe… END_OF_DOCUMENT_TOKEN_TO_BE_REPLACED