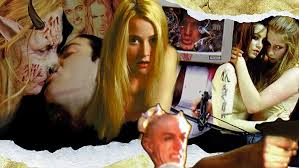 This blog is a thank you to MUBI, the streaming service with carefully curated foreign and independent films added daily, for their partnership with The Frida Cinema which has provided our Film Club members with three free months of eclectic cinema. Tromeo & Juliet is available to stream on MUBI until May 6th, with more Troma coming soon!

Many are blissfully unaware of the fact that Willam Shakespeare– the greatest writer who ever lived– was, to put it eloquently: a bit of a dirty boy.

Despite the air of propriety and seriousness we’ve come to associate with the very idea of Shakespeare, this could not be further from what his work actually meant to its audiences back in the day. With even just the slightest amount of research, you’ll find a plethora of brash sexual euphemisms, crude puns–even “your mom” and penis jokes-– and so much more that would be far from considered subtle. When you know that “nothing” was slang for vagina, Much Ado About Nothing and the famous exchange between Hamlet and Ophelia takes on a whole different meaning, and ol’ William’s writing actually becomes more brilliant in its wordplay. No wonder his plays became illegal to perform at one point during the English Restoration.

Though I’m no English scholar, I did bookend high school with Romeo and Juliet and Hamlet. While I greatly enjoyed that particular bit of curriculum, I can’t help but feel robbed. The real tragedy is the omission and censorship of these contextual insights by educators, adaptations, and even annotated versions of the text. It’s not only a disservice to the actual content, but keeps kids from learning anything about Shakespeare that they might even consider “cool”.

Enter legendary cult icon and Troma Entertainment co-founder Lloyd Kaufman, who by the 1990’s had long since cemented himself as a master of schlock, gore, and sex. He recognized Shakespeare as the “shit disturber” he truly was, and having made his career on the disturbing of shit, Kaufman felt “some debt to Shakespeare”. Whilst visiting the birthplace of the playwright and poet, Kaufman recounts:

Once the titular pun was conceived in the early 90’s, Kaufman wanted to do a romance, and bring “true love” to the forefront of a Troma film. Additionally, like many folks at the time, he was tired of the big-budget Hollywood versions of Romeo and Juliet that kept coming out– ironically, Baz Luhrmann’s Romeo + Juliet would be released just a few months after T & J in 1996, much to the chagrin of the writer/director James Gunn, who did the third and final pass on the Tromeo & Juliet screenplay.

As a complete Kaufman novice, the film is just as disgusting and ridiculous as I thought it’d be, and so much more. The concept and setting of the film itself is brilliant– it’s no stretch of the imagination that the 90’s equivalent of Mercutio, the absolute mad lad who flips people off and starts street quarrels, would be Manhattan street punks hawking lugies into the rich kids’ party food. Whilst rivaling porn producers wouldn’t be my first idea of warring houses, it definitely makes sense for it to be one of Troma’s; though having the famous balcony monologue delivered upon the discovery of Juliet, bound and encased in a plexiglass prison, is something only they could come up with.

Though its humor isn’t understated by any means, the most enduring and effective comedy comes from the smaller moments– often peripheral gags: the police officer eating a plain bagel during an interrogation, a phone-sex operater saying “yippie-yahoo” during fake climax, and the discussion about the interpersonal verses community-level teachings of Sesame Street and Mr. Rogers the characters are in the middle of just as Juliet’s cousin shows up to the tattoo parlor to kill Tromeo with a weapon in the shape of Hitler’s head, to name a few. The shirtless passerby who looks on in horror as Sammy Capulet screams and tries to put his brains back into his cracked head on the sidewalk, and is carrying a huge monitor lizard by the tail for absolutely no reason. It’s gold, and had me nearly crying at one point, even if my laughter was cut short by a groan or grimace of disapproval at the next scene.

What’s particularly surprising is that despite it all, the ease with which the actors go in out of the original Shakespearean dialogue. Will Keenan (Tromeo) and Jan Jensen (Juliet) give amazing performances, and obviously knew the meaning of each Old English word as they delivered their lines. It’s this unique sweet spot of dedication, no matter how insane the situation becomes that makes it all work, as well as likely getting you to care about the characters, if even just a little. Troma somehow makes moments between the two star-cross’d lovers… actually kind of romantic. Rather than a masquerade, Juliet falls for Tromeo at a costumed house party, the boy in full cow garb. But he flirts with her, dressed in full cow garb, mid-dance with her meat-tycoon fiance, and it still weirdly has the spirit of the original scene. The care in this moment shows, from the camerawork to the beautiful lights mimicking stars behind them, and truly the mark of Kaufman’s successful quest to represent a love story But don’t be fooled– the film is quick to remind you of exactly what it is you’re watching, following flowery proclamations of young love with toe-sucking and body horror. Incredibly, Tromeo & Juliet is the last version of Romeo and Juliet I’d expect to have a happy ending– or at least, the Troma version of a happy ending. Concerningly, this isn’t the first adaptation I’ve come across that features incest, but will hopefully will be the last.

I love the Frida, as an avid movie watcher, it’s great to have a place to go where many classic, cult and underrated films are shown. I had the pleasure of attending “The Decline of Western Civilization” screening with director Penelope Spheres doing a Q&A. Her films are so historically important and impacted me at a very young age. I am forever grateful for the experience, like nowhere else would this be possible. I think it’s truly amazing what the staff and everyone involved is doing for the … END_OF_DOCUMENT_TOKEN_TO_BE_REPLACED