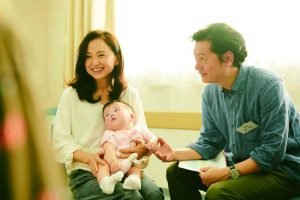 After a long and unsuccessful struggle to get pregnant, convinced by the discourse of an adoption association, Satoko and her husband decide to adopt a baby boy. A few years later, their parenthood is shaken by a threatening unknown girl, Hikari, who claims to be the child’s biological mother. Satoko decides to confront Hikari directly.

“The Japanese auteur Naomi Kawase has returned with another of her highly distinctive, tremulously sensitive movies…there is a sustained emotional seriousness in this movie, with committed performances.” – Peter Bradshaw, The Guardian

LOVE this theater..OMG. I’ve been here several times now for different events. I’ve attended 2 of the 3 Scott Pilgrim events thrown by Cinemattack. I was even the lucky winner of the Scott Pilgrim album on vinyl. I don’t have a record player..but may as well be a trophy for me because I never win anything! lol. I also attended “The Last Unicorn” event with Peter S Beagle- the author speaking and answering a Q and A afterwards. This was so awesome. I have always loved loved this movie and it was … END_OF_DOCUMENT_TOKEN_TO_BE_REPLACED

I love the Frida, as an avid movie watcher, it’s great to have a place to go where many classic, cult and underrated films are shown. I had the pleasure of attending “The Decline of Western Civilization” screening with director Penelope Spheres doing a Q&A. Her films are so historically important and impacted me at a very young age. I am forever grateful for the experience, like nowhere else would this be possible. I think it’s truly amazing what the staff and everyone involved is doing for the … END_OF_DOCUMENT_TOKEN_TO_BE_REPLACED