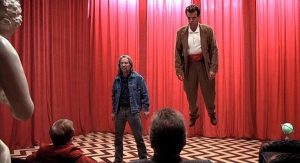 “There are many stories in Twin Peaks. Some of them are sad, some funny. Some of them are stories of madness, of violence. Some are ordinary. Yet they all have about them a sense of mystery – the mystery of life.”
― Margaret Coulson, The Log Lady

The great American North-West countryside that contains David Lynch’s vast and mythic Twin Peaks is pregnant with a furious history. Shocking images of pure evil lurk within the hearts and minds of everyday rural folk, waiting to be unleashed; their idyllic middle class lives, paved with the original sin of their ancestors. The genocide of indigenous peoples in America is but a single component of the labyrinthian network of stories that compose Twin Peaks, but its revolting history codifies the dramaturgical conceit brewing at the heart of this dreamy murder procedural: How can you undo what can surely never be undone? Where, on earth, do these unspeakable horrors come from?

In Lynch’s mournful prequel film Fire Walk With Me, the rich, cultural traditions of the great Nez Perce Nation, where Twin Peaks is located, supply most of the narrative apparatus and visual motifs for this transcendent melodrama. Owls, shadow doppelgangers, douglas firs, spiritual realms, horses, all of these recur in Nez Perce storytelling. A barrage of these symbols descend on the small mountain town during the final days of high school student Laura Palmer – homecoming queen, four months from graduation. The life she never got to have is revealed here with stirring frankness and unsettling imagination.

We are shown clues that we recognize from the TV show, yes, but mostly we are given a moving portrait of a young woman grappling with the sexual abuse she’s endured at the hands of her father; at the hands of men. Laura’s spiritual disintegration swells over the course of the film as the evil BOB attempts the potentially catastrophic process of changing human hosts, from her father Leland to her.

With the advantage of final cut, Lynch abandons all manner of traditional cinematic comforts in Fire Walk With Me as an attempt to refocus the essence of Twin Peaks’ restrained operatic style, which, in the second season, was tampered in a quagmire of network executive interference. Gone are the plucky array of comedic side characters that ground our sense of logical reality. Gone are the lush monologues sung by Special Agent Dale Cooper (an eternally zen Kyle MacLachlan), who appears in this film in a minor capacity. By effectively removing the “campy” tone that was enforced by traditional TV standards, Lynch is able to elevate this tragic
fable into a true atmospheric horror film not unlike Mandy (2018), or The Witch (2016), or Carnival of Souls (1962). Films where a character’s experience with misery and pain are the story.

Working with a widescreen canvas not available to them when producing the pilot, Lynch and cinematographer Ron Garcia paint elaborately shadowed compositions using flickering lights that conspicuously blink during scenes of collapsing morality, and waning innocence. As Laura radically attempts to reclaim her sexual agency from the violations of BOB, her dreams transform into spectacularly colored hallucinations of her pending demise. An inevitability of the always looming darkness that invades Fire Walk With Me. Even in broad daylight, shadows cast long, inky shapes on sidewalks, on faces and down hallways. Hell, the first shot of the Philadelphia sequence is not of the Liberty Bell, but of its very own shadow!

Laura’s suffering is depicted as a consequence of this darkness, of repressed history. The infectious nature of neglected pain & sorrow is echoed in Mary Lambert’s Pet Sematary (1989), where the buried dead are reanimated by the rage of disturbed Mi’kmaq spirits hiding beyond the trees. Stanley Kubrick’s The Shining (1980) conducts another variation on the same theme nearly ten years before it, as Jack Torrance’s time travelling descent into madness is explained by the presence of Native American burial grounds under the Overlook Hotel. A furious history. Though loaded with narrative puzzle-pieces that help shape the deeper mythology of the show, Fire Walk With Me will be wholly memorable for its two titanic screen performances from Ray Wise and Sheryl Lee as Leland and Laura Palmer respectively. In one nightmarish confrontation
after another, Lynch flexes his affinity for crafting anxious, and chilling scenes punctuated with splenetic bursts of raw emotion. Consider the morning after the Canadian nightclub sequence: Leland drives Laura to breakfast, they get stuck waiting for an old couple to cross the
intersection. MIKE suddenly appears to warn Laura about her father. Leland revs his car engine and honks his horn with increasingly violent decibels to drown out the ghastly truth, but Laura already knows, her worst suspicions confirmed. It’s a sensational scene in a film full of sensory
embellishment.

Angels will disappear from Laura, they will reappear to her in a changed context. How literally they are to be interpreted is anyone’s guess. But with a destiny that was decided long ago, Laura completes her final act of free will by choosing a death in the black lodge over a life with
BOB. If you’ve seen the rest of the series, then you know what happens next. If you haven’t then Laura’s life evaporates right before your very eyes, remaining in dreams forever.

LOVE this theater..OMG. I’ve been here several times now for different events. I’ve attended 2 of the 3 Scott Pilgrim events thrown by Cinemattack. I was even the lucky winner of the Scott Pilgrim album on vinyl. I don’t have a record player..but may as well be a trophy for me because I never win anything! lol. I also attended “The Last Unicorn” event with Peter S Beagle- the author speaking and answering a Q and A afterwards. This was so awesome. I have always loved loved this movie and it was … END_OF_DOCUMENT_TOKEN_TO_BE_REPLACED

I love the Frida, as an avid movie watcher, it’s great to have a place to go where many classic, cult and underrated films are shown. I had the pleasure of attending “The Decline of Western Civilization” screening with director Penelope Spheres doing a Q&A. Her films are so historically important and impacted me at a very young age. I am forever grateful for the experience, like nowhere else would this be possible. I think it’s truly amazing what the staff and everyone involved is doing for the … END_OF_DOCUMENT_TOKEN_TO_BE_REPLACED