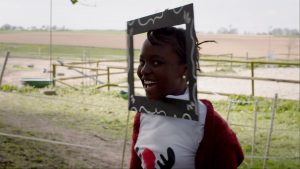 Commissioned as a dedicated artwork for the newly constructed Dora Maar middle school on the outskirts of Paris, Un Film Dramatique is a lively portrait of the first class to attend the school, filmed over the course of four years. The group of 21 middle schoolers discuss the drama of their daily lives and experiment with cameras and equipment. They are the film’s subjects, and also its makers.

With a refreshingly uninhibited approach, Éric Baudelaire (Letters to Max, The Anabasis of May…) offers a new perspective on the realities of our current socio-political moment that is both playful and purposeful. As the students debate the approaching elections and the immigration crisis, they also seek to answer a key political question—what are we doing here together?

“[A] rare film that conveys the capacious lyricism we tend to associate with the cinema of Agnès Varda. This is one of the year’s very best.” –Michael Sicinski, Cinema Scope

LOVE this theater..OMG. I’ve been here several times now for different events. I’ve attended 2 of the 3 Scott Pilgrim events thrown by Cinemattack. I was even the lucky winner of the Scott Pilgrim album on vinyl. I don’t have a record player..but may as well be a trophy for me because I never win anything! lol. I also attended “The Last Unicorn” event with Peter S Beagle- the author speaking and answering a Q and A afterwards. This was so awesome. I have always loved loved this movie and it was … END_OF_DOCUMENT_TOKEN_TO_BE_REPLACED

I love the Frida, as an avid movie watcher, it’s great to have a place to go where many classic, cult and underrated films are shown. I had the pleasure of attending “The Decline of Western Civilization” screening with director Penelope Spheres doing a Q&A. Her films are so historically important and impacted me at a very young age. I am forever grateful for the experience, like nowhere else would this be possible. I think it’s truly amazing what the staff and everyone involved is doing for the … END_OF_DOCUMENT_TOKEN_TO_BE_REPLACED