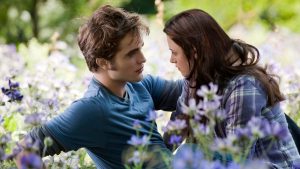 I remember back when the Twilight series was all the rage (or all the disdain, depending on where you stood) and one of the major criticisms of it was “Vampires aren’t supposed to be sexy!” The fervor around Edward and his undead brethren drew the ire and derision of many. Did some of this ire stem from the run-of-the-mill misogyny that crops up whenever a piece of media owes its popularity to an audience of predominately young women/teenage girls? It’s an easy “yes” from me. But in hindsight, the insistence on emphasizing film and literature vampires’ monstrosity reveals something interesting about a thing we seem to have forgotten: vampires are supposed to be sexy.

I do have to put some qualifiers on “sexy,” though. I don’t necessarily mean that we’re meant to find them attractive—although that’s always a bonus, to be honest. No, I mean “sexy” as in “the function of vampires in much of Western literature and cinema is very closely linked to contemporary attitudes toward sex and desire.” An attractive vampire functions as an easy shorthand.

Where do I get the idea that vampires and sex are somehow related? After all, vampires and vampire-adjacent creatures have stalked through various cultures’ folklore for generations before they ever appeared in print. I can’t speak to how those tales connect to sex. However, Bram Stoker’s 1897 novel Dracula set much of the precedent for fictional vampires to come, and the novel is rife with allusions to and anxieties regarding desire. The novel’s protagonist, Jonathan Harker, leaves behind his fiancée, Mina Murray, when he travels to Transylvania in order help the mysterious Count Dracula purchase property in England. While perhaps Jonathan doesn’t feel Mina’s absence as keenly in the face of the bizarre things he’s witnessing in the castle, it does spring to reader’s mind when Dracula’s three unnamed wives enter the scene. “All three had brilliant white teeth, that shone like pearls against the ruby of their voluptuous lips,” Jonathan later writes in his journal. “I felt in my heart a wicked, burning desire that they would kiss me with those red lips.” In spite of his terror, Jonathan is overwhelmed with desire. And when he finally escapes Dracula’s castle, he sends for Mina and marries her as soon as he can…while convalescing from the ordeal in a Budapest hospital.

It could be argued that it was the near-death experience that prompted Jonathan to secure his and Mina’s relationship, but the Murray-Harker relationship continues to be under threat for the rest of the novel. The brides make one more appearance toward the end of the novel, while Jonathan, Mina, Professor Van Helsing et al. are on their quest to vanquish Dracula. They appear to Mina in the night, bidding her in “sweet tingling tones” to come and be their sister, Dracula’s fourth bride.

But even if we set the vampire wives aside, the Count’s influence still slithers its way into the novel’s romantic pairings. After Mina’s friend Lucy Westenra rejects two suitors in rapid succession and accepts the third, she quickly falls prey to Dracula’s supernatural charms. Undead, Lucy is “wanton,” a “devilish mockery of [her former] sweet purity.” She attempts to induct her fiancé into Dracula’s domain, but it’s the disgust for this new, overtly sexual Lucy that makes it easier for him and Van Helsing to dispatch her to true death. Dracula is far from deterred; in fact, he sneaks into the Harkers’ bedroom and forces Mina to drink his blood. He literally invades their marriage bed with Jonathan still in it, incapacitated. Most horrifically, the image heavily resembles an assault.

Overall, we can trace much of the horror in Dracula to Victorian sensibilities about relationships, marriage, and sexual desire. Specifically, carnality outside of relationships that are considered “proper” is a corrupting influence. Mina, who thinks of little else but Jonathan and their friends’ quest to defeat Dracula, is able to maintain her dignity and even win her purity back after dedicating so much time and effort into being helpful. Lucy, who was being courted by and proposed to by three men at once, can only be redeemed in death.

What a hidden gem! I had such a lovely time at a recent showing of Godzilla (1954). This theater is a bit timeworn, yet undeniably quaint and charming with an unconventional feel. And interestingly enough, the audience served as the sweet element of surprise. Those in attendance created an atmosphere of delight, comfort, and personal acceptance… and get this.. there was an actual host who presented a brief preface to the film just prior to viewing. Very collegiate, which I loved!  All in all pe… END_OF_DOCUMENT_TOKEN_TO_BE_REPLACED