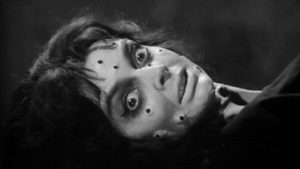 Away from Murderer’s Row where American werewolves, hockey-masked serial killers, and vampires reside side-by-side in their haunted houses with white picket fences stained pink from blood is a dark alley that few horror fanatics dare to venture down. The lucky few who follow it—and survive—are shown such sights of terror and repulsion by their Italian horror counterparts; horror that’ll make even Alfred Hitchcock, the “Master of Suspense,” squirm in his seat.

Three of the most prominent Italian horror directors are Mario Bava, Dario Argento, and Lucio Fulci—filmmakers the Frida Cinema will feature this month. From Gothic chillers to supernatural thrillers to extreme exercises in gore, these horror legends paved the way for countless others to imprint their own ghastly visions of horror into celluloid.

Mario Bava’s vast filmography showcases his creativity as a horror auteur. Equally focused on efficient storytelling and colorful lighting for his visual palettes, he moved from atmospheric black-and-white Gothic chillers like Black Sunday to arguably creating the murder-mystery giallo subgenre with The Girl Who Knew Too Much and Blood and Black Lace.

Each of these films exhibit the master stroke of a painter and inventive murder set pieces. Bay of Blood (aka Twitch of a Death Nerve) arguably inspired the wave of American slasher films in the late 1970s and early 1980s.

If Mario Bava invented the giallo, then Dario Argento codified the elements that would essentially define the popular subgenre—a black-gloved killer, elaborate murder set pieces, hyper-violent scenes and sexuality-charged images—with his debut, The Bird with the Crystal Plumage. His masterpiece Deep Red is often considered the quintessential giallo film.

Following Deep Red, Argento experimented with supernatural thrillers (Suspiria and Inferno) before returning to the genre he helped pioneer with 1980s classics Tenebre and Opera. While the quality of his films have declined since the 1990s, his influence on modern horror filmmakers remains undisputed.

Often considered the “Italian Godfather of Gore” by his contemporaries and horror fans, Lucio Fulci experimented in multiple genres over the course of his career. Although he directed successful Spaghetti Westerns and giallo films, including A Lizard in a Woman’s Skin and Don’t Torture a Duckling, he is mainly known for his splatter pictures that feature extreme gore and outrageous visuals.

From Zombie (a rip-off of George A. Romero’s Dawn of the Dead) to his loosely connected “Gates of Hell” trilogy—City of the Living Dead, The Beyond, and House by the Cemetery—Fulci remains a prominent figure in Italian horror cinema.

What a hidden gem! I had such a lovely time at a recent showing of Godzilla (1954). This theater is a bit timeworn, yet undeniably quaint and charming with an unconventional feel. And interestingly enough, the audience served as the sweet element of surprise. Those in attendance created an atmosphere of delight, comfort, and personal acceptance… and get this.. there was an actual host who presented a brief preface to the film just prior to viewing. Very collegiate, which I loved!  All in all pe… END_OF_DOCUMENT_TOKEN_TO_BE_REPLACED