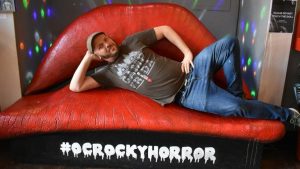 …except this time, I’m cheating a bit. Today I interviewed The Frida Cinema’s fantastic Volunteer Coordinator/Manager (so not a volunteer, per se), Bryan Terry. He is in his 30’s (he’s not positive on the exact age though – as he said, “One sort of stops keeping track after a while…”), he’s always down to talk about movies (goes with the territory here), and his first-and-foremost job is that of graphic designer, for which he does freelance work when not at The Frida. (And yes – he puts together The Frida’s fantastic calendars!)

How did you hear about The Frida?

I heard about The Frida from Logan (The Frida Cinema’s Founder/Executive Director Logan Crow), when we both ended up on the Board of OC Pride this past year. My partner Andy was the Marketing Director for OC Pride, Logan was their Operations Director, and I was their Graphic Artist. Our time with OC Pride was fun, but we also had some really challenging times, and we ultimately all decided after our first year we’d step down. There were just differing opinions on the direction of where OC Pride should go, and rather than being a hindrance, we decided to step back. Logan mentioned The Frida was struggling a little bit, particularly with his time stretched over two non-profits, and as Andy and I are always looking for ways to get involved with our community and help out, we thought, “Well, let’s check out the Frida and see if there’s a spot for us to help.” We jumped in to volunteer and fill in gaps where it was needed, and here we still are today!

What has been your favorite Frida Cinema experience?

It’s a toss up. If you asked me about a month ago I would say Camp Frida (The Frida Cinema’s first 12-hour movie marathon). That was amazing…it was awesome, because it taught us a lot about the experience, not so much of “Oh we’re a movie theater and we show movies.” Every movie theater does that, AMC does that, Edwards does that, but this showed just one way that we stand apart. It’s not just about programming – it’s about the experience we offer the moment you step through our door. Camp Frida was built on that philosophy, but turned up to a ten. We started by filling the lobby with trees, and filling Theater One with a tent in a foresty area – we essentially turned our cinema into a summer camp. The experience of it was so amazing, and so fun for everyone. It was incredible. If you ever get a chance, go on to The Frida Cinema Facebook page and look up Camp Frida Found Footage. You’ll see a video of our host, Head Camp Counselor Ally, and her ultimate demise at the end. It was a slasher movie marathon, so obviously somebody had to die! Unfortunately, it was her. It was so much fun. But I think on top of that, the first screening of Drag Race is my favorite experience now. It was a full house! It was a free event, and every seat was taken. Personally, I love watching Drag Race, and it’s always fun to watch it with a group of friends, so imagine if that group of friends was 200 people screaming, “Yas, queen!” It felt like the very definition of Community.

What’s your favorite movie that has been screened at The Frida?

My favorite movie is The Secret of NIMH. The reason it’s my favorite is: well, it’s the best movie ever made. Disagree and I will fight you! But as a kid when I watched it and I thought, wow – somebody drew this. Somebody took a pencil to a piece of paper, and drew all this. I wanna do that. It sent me down the path of doing art, and eventually graphic design. I don’t know – it was a very formative film for me. It was like this “Aha!” moment of,*gasp* I can do that! And when I asked Logan if we could screen it, it made me so happy when he was like, “Absolutely!” And then he even added screenings of Don Bluth’s The Land Before Time to complement it.

What inspired you to become part of The Frida?

There comes a point in time – some of us later than others, and I’m one of them – I started to feel like I needed to give back to the community. I’m a big fan of Santa Ana – I was the type who moved place to place, never really stuck my roots anywhere. I happened to land in Santa Ana, and there’s an energy here that’s so good. We’re just so tight-knit, and I don’t want to be corny, but there’s definitely a family-oriented energy. I completely dug that, so I wanted to give back. At first I thought, well I’m gay so I wanna give back through OC Pride. Then I realized, maybe I want to try something more artsy, and Frida fit the bill. That’s the cool thing about Frida, it’s a place where all the paths meet. You can be punk, you can be gay, you can be… buttoned-up straight-laced mom whose just looking for a movie. They all meet here at some point, and it’s kinda amazing. Perfect example: when we had the Drag Race premiere here, we didn’t double-book, but we had a back-to-back movies. We had this hockey-group that came in for the event before Drag Race, and there was all these biker looking dudes here. When their event ended, they stayed to hang out in the lobby. Then, we had Drag Race happening so all the the fans started showing up. It was as if we were in the middle of a biker bar that suddenly got taken over by drag queens.  And it was awesome.  I wish I had taken a picture, because it was this weird world of serious-looking bikers mixed with people saying, “Yas Gurl!” You know, normally people would think, “Oh this could be bad.” But no! The bikers were talking to the drag queens, everyone was getting along and having a great time.  Plus you know, every drag queen wants a sexy biker dude, so that probably helped. It was so fun, and seriously, so amazing.

Could you tell the audience why you think The Frida should be the cinema they should go to, based on your own passion for it?

We’re always striving to be better, and providing an experience beyond the movie you are seeing. When you come through our doors, we want you to know you are welcome, your presence and support are appreciated – that’s probably one of our biggest goals here. Even here in the lobby, we just want you to feel like you belong here, and that you’re comfortable. There’s also this energy we try to instill: if you’re this nerdy cinema dude who wants to talk movies, we want you here. It’s a lot of fun, and even just our events, our events are killer. If you’ve never been to one of our events – well first off, why not?? But check us out for yourself – come to one of our events.  We’re proud to be part of the larger Santa Ana culture and vibe of togetherness, community – when we’re all together, we’re family. When we’re all together watching Drag Race, or getting murdered by Jason at Camp Frida, or watching the rats of NIMH move that brick to save Mrs. Brisby’s family, we’re all brothers and sisters.

I love the Frida, as an avid movie watcher, it’s great to have a place to go where many classic, cult and underrated films are shown. I had the pleasure of attending “The Decline of Western Civilization” screening with director Penelope Spheres doing a Q&A. Her films are so historically important and impacted me at a very young age. I am forever grateful for the experience, like nowhere else would this be possible. I think it’s truly amazing what the staff and everyone involved is doing for the … END_OF_DOCUMENT_TOKEN_TO_BE_REPLACED

LOVE this theater..OMG. I’ve been here several times now for different events. I’ve attended 2 of the 3 Scott Pilgrim events thrown by Cinemattack. I was even the lucky winner of the Scott Pilgrim album on vinyl. I don’t have a record player..but may as well be a trophy for me because I never win anything! lol. I also attended “The Last Unicorn” event with Peter S Beagle- the author speaking and answering a Q and A afterwards. This was so awesome. I have always loved loved this movie and it was … END_OF_DOCUMENT_TOKEN_TO_BE_REPLACED