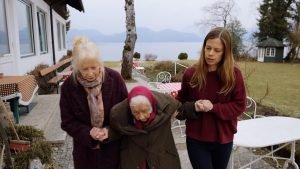 In this personal story about the eternal cycle of life, identity, roots, and self-fulfillment, director Janna Ji Wonders seeks to uncover the secrets of her family’s past and her role among four generations of strong, passionate women. Entrenched in their home near Bavaria’s Lake Walchensee, the women manage a café while the men in their lives come and go. But with the freedoms of the 1960s, Janna’s mother Anna and her aunt Frauke take off for Mexico, where they perform traditional German music and take part in Ayahuasca ceremonies. They also visit San Francisco during the “Summer of Love,” travel to Indian ashrams, and became part of Rainer Langhans’ Kommune 1 in Berlin. But still, they ultimately return to Lake Walchensee.

I love the Frida, as an avid movie watcher, it’s great to have a place to go where many classic, cult and underrated films are shown. I had the pleasure of attending “The Decline of Western Civilization” screening with director Penelope Spheres doing a Q&A. Her films are so historically important and impacted me at a very young age. I am forever grateful for the experience, like nowhere else would this be possible. I think it’s truly amazing what the staff and everyone involved is doing for the … END_OF_DOCUMENT_TOKEN_TO_BE_REPLACED