We Are Little Zombies

Premiered at the 2019 Sundance Film Festival, where it was the winner of the World Cinema Dramatic Special Jury Award for Originality, Oscilloscope Laboratories presents We Are Little Zombies! 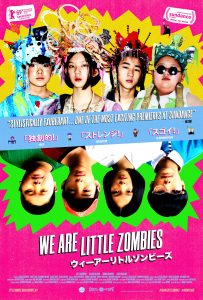 When four young orphans — Hikari, Ikuko, Ishi, and Takemura — first meet, their parents’ bodies are being turned into dust, like fine Parmesan atop a plate of spaghetti Bolognese, and yet none of them can shed a tear. They are like zombies; devoid of all emotion. With no family, no future, no dreams, and no way to move forward, the young teens decide that the first level of this new existence involves salvaging a gaming console, an old electric bass, and a charred wok from their former homes — just enough to start a band-and then conquer the world. Tragedy, comedy, music, social criticism, and teenage angst are all subsumed in this eccentric cinematic tsunami.

Link to purchase tickets to stream this film in our Virtual Cinema will be available on Friday, July 10th (Thursday at Midnight) until Thursday, August 7th. To purchase and stream, click the button below!

“A rainbow-colored scream into the abyss, Nagahisa’s story of a quartet of orphaned tweens who start a chiptune rock band is as rigorous in its exploration of grief as it is stylistically exuberant…” — Emily Yoshida, Vulture

LOVE this theater..OMG. I’ve been here several times now for different events. I’ve attended 2 of the 3 Scott Pilgrim events thrown by Cinemattack. I was even the lucky winner of the Scott Pilgrim album on vinyl. I don’t have a record player..but may as well be a trophy for me because I never win anything! lol. I also attended “The Last Unicorn” event with Peter S Beagle- the author speaking and answering a Q and A afterwards. This was so awesome. I have always loved loved this movie and it was … END_OF_DOCUMENT_TOKEN_TO_BE_REPLACED

I love the Frida, as an avid movie watcher, it’s great to have a place to go where many classic, cult and underrated films are shown. I had the pleasure of attending “The Decline of Western Civilization” screening with director Penelope Spheres doing a Q&A. Her films are so historically important and impacted me at a very young age. I am forever grateful for the experience, like nowhere else would this be possible. I think it’s truly amazing what the staff and everyone involved is doing for the … END_OF_DOCUMENT_TOKEN_TO_BE_REPLACED