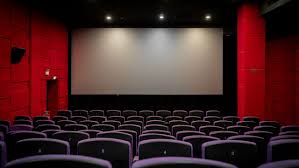 This week, we have a guest blog from Michael Aguirre, Frida Cinema regular!

I am not gonna lie to you fine folks…I’ve been pretty bummed out ever since The Frida Cinema temporarily closed its doors. Last time I was at the theater, I was there for WTF Wednesday since Trevor had programmed David Cronenberg’s The Brood for the night. Since then, the theater experience has been put on indefinite hiatus. This past Wednesday I found myself fiending for the silver screen. My Boston Terriers, Tamale and Felipe, have made it quite clear that trying to watch a movie at home quietly is entirely impossible. Everything in the area was closed, so I was considering making the drive up the 83 Highway to Montclair to an endangered landmark known as the Mission Tiki Drive-In Theater. They were screening a double bill of Indiana Jones And The Last Crusade and Raiders Of The Lost Ark. I would usually not consider driving so far for such mediocre films (please send hate mail to: mikeiswaydope@yahoo.com) but I really wanted to see a film on the big screen, as I believe they are intended to be seen. Shortly after that thought, I pulled up Google Maps on my phone to gauge the distance of my hypothetical trip and was easily persuaded to stay home to watch The Human Tornado instead. It’s where Dolemite (Rudy Ray Moore) flees to California to help Queen Bee (Lady Reed) and her Kung Fu sex workers take on the local gangsters. It was pretty awesome.

I wish I could tell you all that this will be over tomorrow, but the reality is that these are uncertain times we are living in, and to be quite frank, I am very antsy to see in which direction the film industry will shift and how movie theaters will follow. In the current state of the world, films are having a digital platform release, ditching any theatrical releases as many theaters have been requested to shut doors due to the current pandemic. Throughout history in the United States, there have been many significant large events which caused major shifts within the country’s film industry. The Spanish Flu was a threat in 1918, and the silent film productions of that time were completely halted. Many individuals at the time believed Hollywood would never return back to its old self. But it did, and better than ever. Along with the shifts in the industry, the movie business is obligated to adjust with the shifts, or be left in the dust. For example, Hollywood was experiencing it’s  “Golden Age” when it suddenly came to a drastic stop due to major changes in economics and culture that were happening in the 1950’s. The suburbs were becoming a place where families could flock to, so large numbers of people were relocating out of the city, but the theaters themselves were not. There were many factors in this shift, but none was more brutal than the arrival of the home television set. The big game changer. It sat conveniently in your home, and was cheaper than traveling to the city to go see a film. During the early 1950’s, more and more people were ditching the more expensive movie-going theater experience in favor of narratives on a television screen in the comfort of their own houses. Film attendance had fallen drastically from 90 million in 1948 to 46 million in 1951. This shift in attendance left Hollywood executives forced to figure out a way in which they could reclaim the audiences they lost by repacking the way they presented their films. This was not a bad thing for the moviegoer (You and me)! This led to studios equipping theaters with groundbreaking new equipment to bring the crowds back in. Luckily, it did.

The audience got some really awesome stuff out of the shift. One of the first attempts at a brand new experience for the audience was 3D. The process itself has been around since the 1920’s when the film The Power Of Love premiered at the Ambassador Hotel Theater in Los Angeles in 1922, but it was first released commercially in 1952 with Bwana Devil, sparking the 3D film craze in the motion picture industry for a period of time. Since both the characters and creatures were brought to life by giving viewers the illusion of depth, it broke boundaries, and the audience now became a part of the world of the film by creating this illusion that they were being touched by objects. It was the first feature-length 3D film in color and also most importantly, it brought people back to the cinema!

We are currently in a state that Hollywood always feared. Even with precautionary measures, and strict guidelines implemented, will studios give moviegoers a reason to return to the seats, knowing numbers will be small and few? COVID-19 won’t be the end of movies or the cinema. Instead, the risk is that the pandemic will change the kinds of movies we get to see on the big screen and whether we can watch them in a big enough crowd to be able to escape together. The communal theater experience seemed like it would be non-existent many times before, but history has shown us that the theater will always remain, through thick or thin, whether you like it or not. As long as someone is in the projection booth and people come to the party, the theater experience will never go away, nor could it ever be replicated at home. Also, I don’t know how much longer I can take of my Boston Terrier, Felipe, profusely chewing his squeaky beer bottle shaped dog toy during extremely crucial scenes of Sleepaway Camp 3: Teenage Wasteland. As many others, I cannot wait till the doors open back up. Till then.