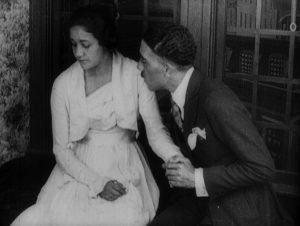 Within Our Gates is the earliest surviving feature film by an African-American director. It was Oscar Micheaux’s second film (after 1919’s The Homesteader, now lost), and involves an idealistic young woman named Sylvia Landry (Evelyn Preer, one of the first great stars of the race film) who attempts to raise money for an elementary school to serve the black community (a premise that would be echoed in Micheaux’s Birthright [1938]). In the course of navigating the racial politics of both the black and white communities, Sylvia’s past is revealed in a series of flashbacks that contain the film’s most notorious sequence: the lynching of her parents by a white mob. Micheaux’s staging of the scene is startling in its bluntness and speaks volumes about the director’s fearlessness and willingness to address taboo subject matter. The film touches upon other themes that would recur throughout the controversial filmmaker’s career, such as the promise of rural life vs. the corruptive influence of the city, and the use of religion as a means of misleading the black community.

What a hidden gem! I had such a lovely time at a recent showing of Godzilla (1954). This theater is a bit timeworn, yet undeniably quaint and charming with an unconventional feel. And interestingly enough, the audience served as the sweet element of surprise. Those in attendance created an atmosphere of delight, comfort, and personal acceptance… and get this.. there was an actual host who presented a brief preface to the film just prior to viewing. Very collegiate, which I loved!  All in all pe… END_OF_DOCUMENT_TOKEN_TO_BE_REPLACED

I love the Frida, as an avid movie watcher, it’s great to have a place to go where many classic, cult and underrated films are shown. I had the pleasure of attending “The Decline of Western Civilization” screening with director Penelope Spheres doing a Q&A. Her films are so historically important and impacted me at a very young age. I am forever grateful for the experience, like nowhere else would this be possible. I think it’s truly amazing what the staff and everyone involved is doing for the … END_OF_DOCUMENT_TOKEN_TO_BE_REPLACED