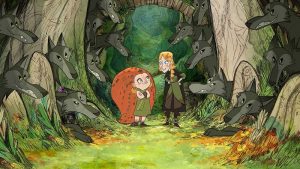 Join us at the baseball diamond at Anaheim’s Zion Lutheran Church & School this Saturday, January 9th as we present one of the most acclaimed animated films of recent years, Wolfwalkers!

Currently rated at 99% on Rotten Tomatoes — with an ultra-rare perfect 100% Audience Score — Wolfwalkers is the latest from two-time Academy Award nominated filmmaker Tomm Moore (The Secret of Kells, Song of the Sea) and Ross Stewart, who also wrote the film.  In a time of superstition and magic, a young apprentice hunter, Robyn Goodfellowe, journeys to Ireland with her father to wipe out the last wolf pack. While exploring the forbidden lands outside the city walls, Robyn befriends a free-spirited girl, Mebh, a member of a mysterious tribe rumored to have the ability to transform into wolves by night. As they search for Mebh’s missing mother, Robyn uncovers a secret that draws her further into the enchanted world of the Wolfwalkers — and risks turning into the very thing her father is tasked to destroy…

Widely considered to be a front-runner for this year’s Academy Award for Best Animated Feature, receiving stronger reviews than even Pixar’s two 2020 entries, Wolfwalkers has already taken home awards from:

Don’t miss this rare opportunity to experience Wolfwalkers on the big screen — from the safety of your car at our drive-in!  Click here for tickets!

I love the Frida, as an avid movie watcher, it’s great to have a place to go where many classic, cult and underrated films are shown. I had the pleasure of attending “The Decline of Western Civilization” screening with director Penelope Spheres doing a Q&A. Her films are so historically important and impacted me at a very young age. I am forever grateful for the experience, like nowhere else would this be possible. I think it’s truly amazing what the staff and everyone involved is doing for the … END_OF_DOCUMENT_TOKEN_TO_BE_REPLACED